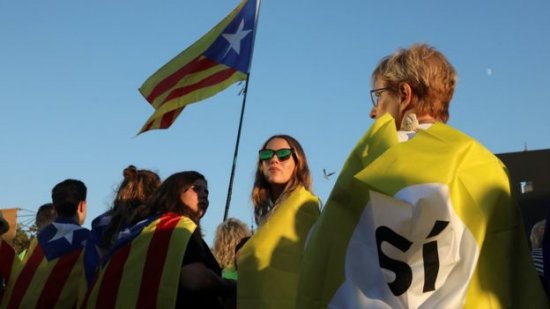 Tens of thousands of people have turned out in Barcelona for the closing rally in the campaign for Catalonia’s banned independence referendum.

Supporters of the ballot are determined to vote on Sunday in the teeth of opposition from Spain’s authorities.

Thousands of extra police have been drafted in from across Spain as the government seeks to stop the ballot.

Google has deleted a phone app being used to direct voters to polling stations from its store.

Phone users in the region who try to download the app from Google Play get a message saying it is not available locally although those who already have the app can still use it.

The corporation said it was complying with a court order.

Catalonia, a wealthy region of 7.5 million people in north-eastern Spain has its own language and culture, and a high degree of autonomy, but is not recognised as a separate nation under the Spanish constitution.

Pressure for a vote on self-determination has grown over the past five years but in the 2015 regional election, won by an alliance of pro-independence parties, about 40% of voters backed parties loyal to Spain.

Police across Catalonia have been ordered to prevent public buildings being used as polling stations on Sunday.

Masses of referendum materials have been confiscated by police in recent weeks and officials involved in running the campaign face prosecution.

However, the Catalan government said on Friday it planned to open more than 2,000 polling stations regardless.

Catalan President Carles Puigdemont told Reuters news agency they would have “ballot boxes and voting slips and… everything people need to express their opinion”.

He and his predecessor, Artur Mas, later arrived for the rally in Barcelona where the stage was decorated with the words “Referendum is democracy” in giant letters.

Spanish Prime Minister Mariano Rajoy stared down Catalan secessionists when they held a trial referendum in 2014, offering no concessions to their demand for a legal vote.

He has pledged to stop the 2017 vote, saying it goes against the constitution which refers to “the indissoluble unity of the Spanish Nation, the common and indivisible homeland of all Spaniards”.

Spanish unionists argue Catalonia already enjoys broad autonomy within Spain, along with other regions like the Basque Country and Galicia.

Government spokesman Iñigo Mendez de Vigo accused the Catalan government of being inflexible and one-sided but it is a charge Catalan nationalists throw back at Madrid itself.

In other developments on Friday: