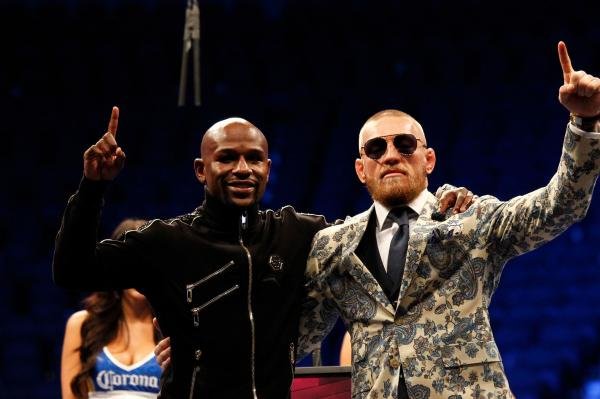 Boxer Floyd Mayweather showed off a piece of artwork featuring opponent Conor McGregor on the wall of his California home.

The piece, composed of broken glass, is nearly 8 feet tall and shows McGregor posing shirtless in front of an Irish flag. It hangs on a wall of Mayweather’s Beverly Hills home on the right side of an entryway, opposite another artwork made in Mayweather’s likeness.

The paintings can be pushed together to create one piece.

Mayweather has been showing off his new crib in Southern California on his Instagram account, debuting its swanky furnishings and vast space for the camera and relaying it to his fans.

He calls the mansion his “Beverly Hills castle.”

The home is located near the Beverly Hills Hotel and features a giant wine cellar, movie theater (complete with a ridiculous amount of candy), a state-of-the-art gym and a beautiful outdoor pool area.

Mayweather beat McGregor on Aug. 26 in Las Vegas with a 10th round TKO to push his career record to 50-0. The 15,096-square-foot Beverly Hills mansion was purchased for about $26 million, according to the Los Angeles Times.