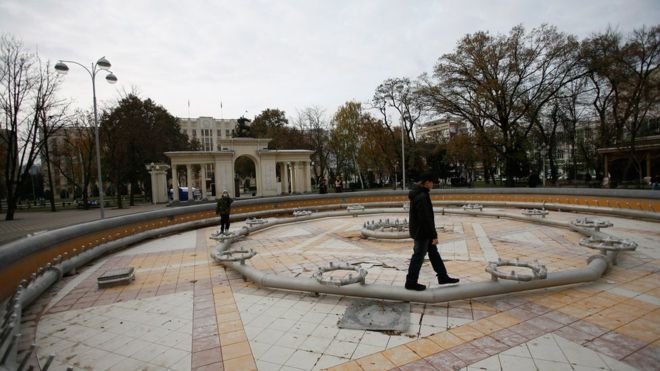 A couple arrested for murder in the south-west Russian city of Krasnodar have admitted killing up to 30 people, local media report.

Dmitry Baksheev, 35, and his wife Natalia, were reportedly arrested after a dismembered body was found at the military base where they lived.

Police confirmed a number of food and meat items discovered at their home were now being tested for human DNA.

A mobile phone was found by road construction workers earlier this month with graphic images of dismembered body parts on the device.

One photograph uncovered and published on Russian media appears to show Mr Baksheev posing with a dismembered body part in his mouth.

A body of a 35-year-old woman was then reportedly discovered at a military academy where the couple live.

The body was dismembered and a bag of the victim’s belongings were reportedly also found.

The couple reportedly still lived in the hostel accommodation at the property after once working at the site.

The Russian interior ministry confirmed the man in the images had been identified and arrested.

A number of human body parts were pictured, some preserved in saline in jars.

In a statement, the Investigative Committee of the Krasnodar Territory confirmed that during the search “food fragments and frozen meat pieces of unknown origin were seized in the kitchen”.

They confirmed forensic testing was being done to determine if the items were human or animal.

Russian media report that photographs found printed in the apartment and on mobile phones could suggest the killings could date back almost two decades.

One photograph is dated 28 December 1999 and appears to show a dismembered human head on a serving plate with fruit.

Police have confirmed the couple remain in custody on the initial murder charge while further investigations and biological testing continues.