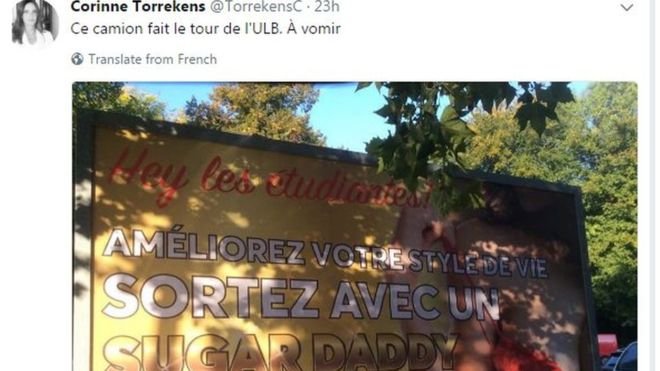 A website’s ad campaign telling young women they could fund their studies by dating a sugar daddy has provoked a wave of anger at Belgian universities.

Vans have been driven around universities displaying messages such as “Hey students! Improve your lifestyle” and “Zero euro student loan? Date a sugar daddy”.

Politicians and universities are taking legal action to stop the campaign.

The website involved is already under fire for an ad campaign in Norway.

Sugar daddy apps in the UK say they are already used by students, but authorities in Belgium and Norway have become alarmed at the tactics used by the website, Rich meet Beautiful, to attract young women.

As well as vans displaying suggestive posters, the website sent out press releases claiming it was aiming to sign up 300,000 Belgian members by the end of 2018.

The man behind the website, Norwegian Sigurd Vedal, told Belgian media that his website was not promoting prostitution at all, although he argued that money was part of every relationship.

Women, he said, were looking for powerful, intelligent men. “Since Fifty Shades of Grey, women are more liberated and are able to express these demands,” he was quoted as saying.

The Federation Wallonia-Brussels, which covers Belgium’s French-speaking community, says it will sue the website for encouraging debauchery and prostitution. Université Libre de Bruxelles (ULB) has complained to Belgium’s advertising regulator.

Prof Corinne Torrekens of ULB, appalled by the success of the ad campaign, said the reality of this sort of site was nothing less than student prostitution.

Similar action is being taken in Flemish areas of Belgium. “The company behind this aggressive and despicable campaign is undoubtedly involved in the area of prostituting young students,” said Bianca Debaets, Minister for Equal Rights in the Brussels region. She condemned the images used in the poster campaign as sexist and degrading.

Authorities in the city of Leuven (Louvain in French) have stressed the ad campaign is not welcome there, Belgian media say.

Earlier this month, the Norwegian consumer ombudsman said the campaign on posters, Facebook and YouTube had to be scrapped or changed immediately as it broke advertising rules on sexual discrimination.

Mr Vedal argued at the time that it did not break the law as it was directed at both men and women. The law states that ads do not “exploit the body of one of the sexes or convey an offensive or derogatory appraisal of women or men”.