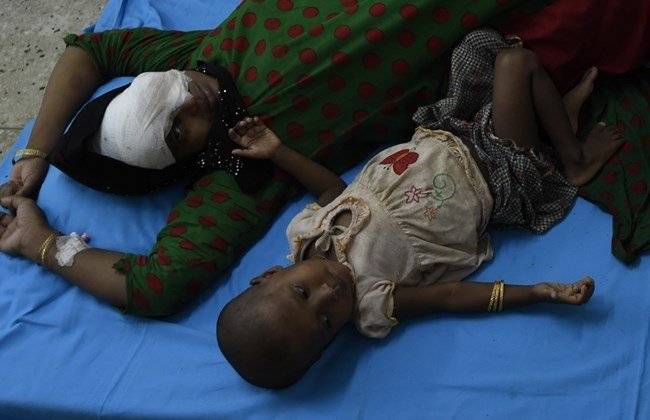 DHAKA – Bangladesh has eased restrictions on aid groups working in refugee camps and sought $250 million from the World Bank to fund emergency relief, officials said Tuesday, after an influx of more than 435,000 Rohingya Muslims from Myanmar has overwhelmed its border area.

Bangladesh has strictly limited access to Rohingya camps in recent years. It has never given reasons, but the country is sensitive about security and there are fears a Muslim influx could tempt extremist groups.

However, a new deluge of refugees since August 25 has put pressure on the existing camps, which were already home to 300,000 Rohingya Muslims who had fled earlier unrest in Buddhist-dominated Myanmar.

The camps are currently facing dire shortages of food and medicine, while the World Health Organisation warned Monday of a growing risk of cholera.

The aid groups still only have permission to work for two months in the camps around the border town of Cox’s Bazar, Hossain said, and must focus on providing healthcare, sanitation facilities and shelters for the Rohingya.

The new groups include local and international charities. Authorities previously only let four international groups — including Doctors With Border (MSF) and Action Against Hunger (ACF) — provide food and healthcare.

Muslim Aid, a British-based charity given permission to operate in Cox’s Bazar last week but whose access was later revoked, remains barred. It operates in other parts of Bangladesh.

Authorities briefly ordered MSF, ACF and Muslim Aid to stop providing aid to the Rohingya in 2012.

Dhaka-based BRAC, one of the world’s largest charities, is among the new groups allowed into the camps.

BRAC senior director Asif Saleh said in a Facebook post that the scale of the “humanitarian crisis” is significantly worse than what is being portrayed by the media.

Bangladesh has deployed dozens of emergency medical teams and sent reinforcements to hospitals in Cox’s Bazar.

They have treated more than 2,350 Rohingya for serious injuries sustained in the crackdown, including bullet and machete wounds and landmine injuries.

Some 80,000 Rohingya children have also been vaccinated for measles, rubella and polio diseases and thousands of adults treated for diarrhoea, respiratory diseases and pregnancy complications.

The World Bank is considering the request, a ministry statement added.

A United Nations official last week said it would need $200 million over the next six months to handle the Rohingya crisis.

The UN made an emergency appeal for $78 million on September 9, but UN resident coordinator in Bangladesh, Robert Watkins, said much more would be needed as the exodus grows.