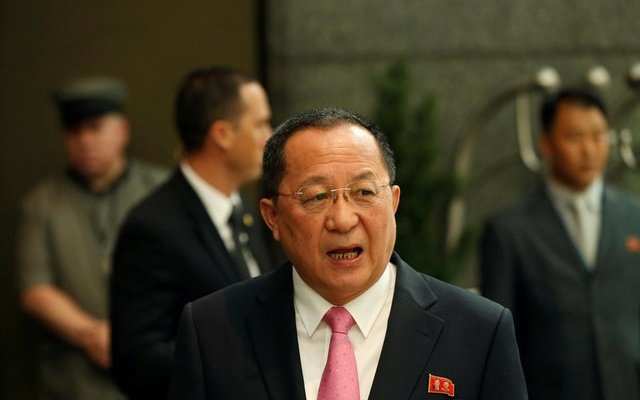 North Korea’s foreign minister has accused US President Donald Trump of declaring war on his country and said Pyongyang had the right to shoot down US bombers.

Ri Yong-ho said this could apply even if the warplanes were not in North Korea’s airspace.

The White House dismissed the statement as “absurd”. The Pentagon warned Pyongyang to stop provocations.

Mr Ri’s comments were a response to Mr Trump’s tweet that the North Korean leadership would not “be around much longer” if they continued their rhetoric.

“The whole world should clearly remember it was the US who first declared war on our country,” Mr Ri told reporters as he was leaving New York, where he had addressed the UN General Assembly on Saturday.

“Since the United States declared war on our country, we will have every right to make counter-measures, including the right to shoot down United States strategic bombers even when they are not inside the airspace border of our country.”

Mr Trump’s tweet followed Mr Ri’s fiery speech to the UN on Saturday, when he described the US president as a “mentally deranged person full of megalomania” on a “suicide mission”.

Referring to Mr Trump’s post, North Korea’s minister said “the question of who won’t be around much longer” would be answered by his country.

Mr Ri’s remarks – not the first time that North Korea has used the phrase “a declaration of war” in relation to the US – are the latest in an increasingly angry war of words between the two countries.

His statement came two days after US warplanes flew close to North Korea’s coast in a show of force.

Pentagon spokesman Col Robert Manning reacted by saying: “If North Korea does not stop their provocative actions, you know, we will make sure that we provide options to the president to deal with North Korea.”

“The only solution for this is a political solution,” he added.

Despite weeks of tension, experts have played down the risk of direct conflict between the two.

North Korea has continued to carry out nuclear and ballistic missile tests in recent weeks, in defiance of successive rounds of UN sanctions.

The country’s leaders say nuclear capabilities are its only deterrent against an outside world seeking to destroy it.

After the North’s latest and most powerful nuclear test earlier this month, the UN Security Council approved new sanctions on the country.