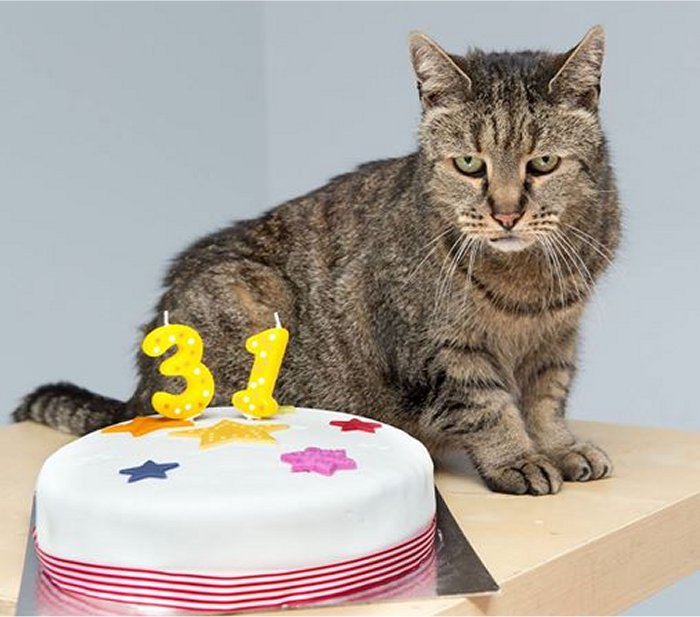 Nutmeg, believed to be the world’s oldest cat, died in England at the age of 32 earlier this month, his owners said.

Westway Veterinary Group in Newcastle upon Tyne announced Nutmeg died on Sept. 14 as a result of heart failure.

“Westway Vets is sad to announce the passing of Nutmeg, a cat thought to be the world’s oldest moggy,” the vet group said. “After an incredibly long life, Nutmeg, who was 32, suffered heart failure after coming to us with breathing difficulties.”

Liz and Ian Finlay cared for Nutmeg for 27 years after taking him in as a stray when he was 5 years old.

“We both feel like our hearts have been ripped out. He was our little boy. ‘He went downhill so quickly it was unbelievable,'” Ian Finlay said. “He suffered from a bad tooth and he had rasping breath. We knew that when we went to the vets that he wouldn’t be coming home. It was an unspoken solace.”

Finlay and his wife said their other cat Spice, who died in the early 2000s, constantly brought Nutmeg into their home before they decided to adopt him.

“We won’t be getting another cat because we don’t think that we will be able to go through this heartbreak again,” he said.

“Obviously he had such a long and good life – we spoilt him rotten. I would have loved a little more time with him, but that is just being selfish,” he said.