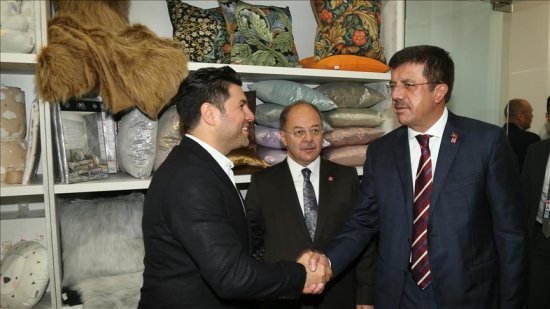 NEW YORK – A new Turkish Trade Center has been opened in the heart of one of the world’s largest financial centers — New York’s Manhattan.

“New York is where everything begins, is designed, born and distributed all around the world,” Turkish Economy Minister Nihat Zeybekci said at the opening ceremony.

He added: “New York’s gross domestic product is around $1.4 trillion, higher than the GDP of Russia.”

Located near Fifth Avenue, the center will provide offices for Turkish companies that want a physical presence in the world’s biggest economy to access the U.S. market.

The goal of the center is to increase the volume of Turkish exports to the U.S.

“These numbers are not sufficient. They must be increased.

“However, when we look at the first eight months of 2016, there is a 36 percent increase in Turkish exports to the U.S., compared to last year, reaching $5.1 billion.”

Zeybekci emphasized the importance of an export-oriented economic growth model — something Turkey achieved in the first half of 2017.

“3.9 percent of the 5.2 percent growth rate during the first two quarters of the year came from exports and production,” he said.

After growing by 3.2 percent last year, Turkey’s economy posted strong growth rates of 5.2 percent and 5.1 percent in the first and second quarters of 2017 respectively.

Those figures were above major economies such as the U.S., U.K. and Germany, which saw second quarter year-on-year growth of 2.2 percent, 1.7 percent and 2.1 percent respectively, according to the Organization for Economic Cooperation and Development.

“That’s why, as a government, we are providing $3 million per annum to support Turkish Trade Center in New York,” he said.

The center follows similar Turkish enterprises in Iran, Dubai and Chicago. Others are due to be opened in Moscow, Frankfurt, London, Tokyo and Oslo, Zeybekci said.

Air Berlin to sell assets after filing for insolvency