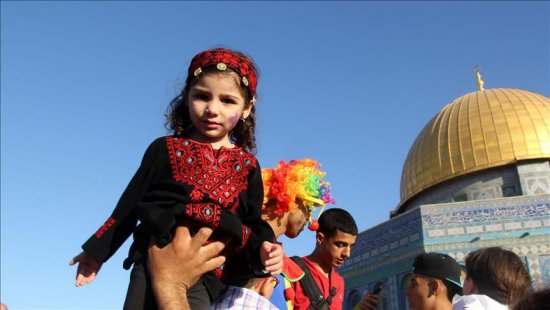 “You are the guardians of the holy Al-Aqsa Mosque, the thorns in the side of the [Israeli] occupation,” Jerusalem Grand Mufti Mohammed Hussein told worshippers gathered in the mosque compound.

“You came today despite all restrictions and obstacles,” he said, “right under the noses of the aggressors who never stop trying to impose new facts on the ground.”

“They [the Israelis] have no right to this place,” Hussein added. “They think their brutal incursions and unjust attacks will break your will; but they will be disappointed.”

“Today, you came to the Al-Aqsa Mosque in confidence and with faith, while they [the Israelis] come here in fear,” he declared.

Palestinian public figures and political factions, for their part, urged Palestinians to mark the occasion at the mosque, while the Israeli authorities temporarily closed off the site to Jewish settlers.

For Muslims, Al-Aqsa represents the world’s third holiest site after Mecca and Medina. Jews, for their part, refer to the area as the “Temple Mount”, claiming it was home to a large Jewish temple in ancient times.

Israel occupied East Jerusalem, in which the Al-Aqsa is located, during the 1967 Arab-Israeli War. In 1980, it annexed the entire city, claiming it as the Jewish state’s “eternal” capital in a move never recognized by the international community.