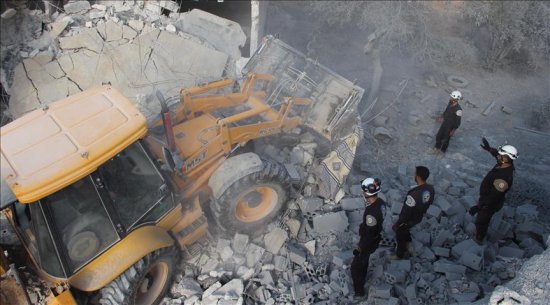 IDLIB – Within the last three days, 12 civilians have reportedly been killed by airstrikes that occurred inside a de-escalation zone set up in Syria’s opposition-held Idlib province.

The towns of Khan Shaykhun and Nayrab were both targeted by unidentified warplanes 16 times, while the towns of Tamanah, Sikeyk, Hamidiya, Tari, Sahyan and Kafar Nabil were struck a total of 29 times, an Anadolu Agency correspondent based in the area reported on Thursday.

Earlier the same day, three members of the same family were killed by an airstrike in Khan Shaykhun, where at least 100 civilians lost their lives in an April 4 chemical attack carried out by the Syrian regime.

Three children were reportedly killed while a woman was injured in a similar airstrike carried out earlier this week.

Another woman was killed in an airstrike that targeted a school in the nearby village of Habid.