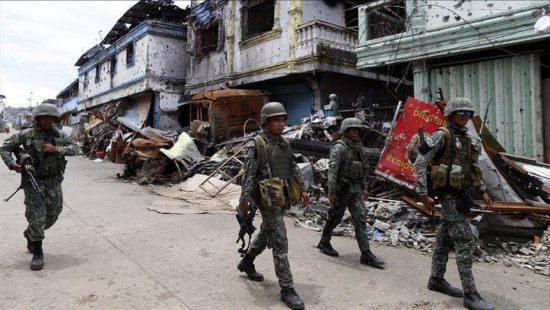 “This capitulation is a product of the intensified offensives being launched by our troops to contain the terrorists and rescue the hostages held captive in the area,” Sobejana said.

The bandits also laid down their firearms, including an M16 rifle, a Garand rifle and a .45 caliber pistol. They surrendered to the military on Pata Island and in Indanan town.

From January 2017 to date, he said of the 114 Abu Sayyaf who surrendered to troops, 65 surrendered in Basilan, 26 in Sulu, 21 in Tawi-Tawi and two in Zamboanga City.

Army Lieutenant General Carlito Galvez, Jr., chief of the Western Mindana Command, said he encourages and welcomes Abu Sayyaf members who are willing to lay down their arms and join the mainstream.

Galvez added it is best that they peacefully surrender rather than fight the more superior troops, which might cost them their lives.

“I congratulate the JTF Sulu for a job well done,” he added. We are looking forward to more enemy surrenders in the next few days, including the Maute terrorists,” he said.

The military said four Vietnamese, five Indonesians, a Dutch man and four Filipinos remain in the hands of the Daesh-linked Abu Sayyaf group, whose Basilan-based leader Isnilon Hapilon has allied with the local terrorist Maute group to establish a caliphate state in Marawi City.

For the past few years, the Abu Sayyaf has been executing its captives, often dumping their decapitated bodies.

In Basilan and Sulu, the terrorist group threat has held back development efforts, hampered education and the delivery of other basic services and ensured the persistence of poverty.

Foreigners — Americans, Malaysians, Europeans, Indonesians and Vietnamese — are prime targets of Abu Sayyaf kidnap-for-ransom activities in Mindanao. Filipinos have also been victimized in their kidnap-ransom activities.

US senator: Suu Kyi must act to stop Rohingya crisi