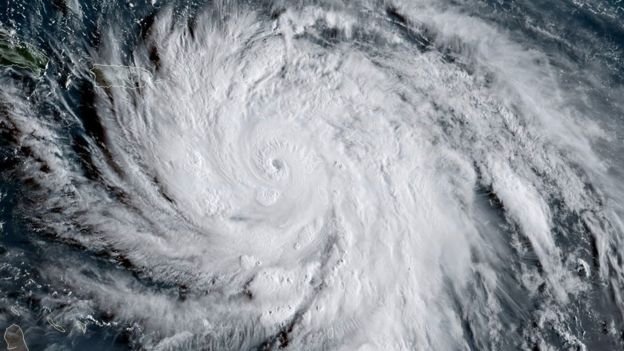 Hurricane Maria is edging towards Puerto Rico as the devastating storm continues its north-westerly path across the Caribbean.

The eye wall of the storm has now reached the outlying island of Vieques, the US National Hurricane Center says.

The category five hurricane earlier hit St Croix in the US Virgin Islands.

Dominica was badly hit on Monday night and aerial footage shows flattened houses. Details are scant as communications are down.

The storm briefly weakened to a four but is now again packing top sustained winds of 280km/h (175mph).

The storm began moving roughly along the same track as Irma, this season’s other category five hurricane.

The governor of Puerto Rico, a US territory, has told the island’s 3.5 million people to seek shelter with the hurricane poised to make landfall within the next few hours.

Officials in Puerto Rico fear the debris left by Irma earlier this month could now prove extremely dangerous in the winds of Maria.

There are also concerns that heavy rain could cause landslides in some places, and that a predicted storm surge of up to 9 feet (2.7m) could swamp low-lying areas.

Puerto Rico has been a haven for people fleeing other storm-ravaged Caribbean islands in recent weeks.

Hundreds of shelters have been set up by the authorities.