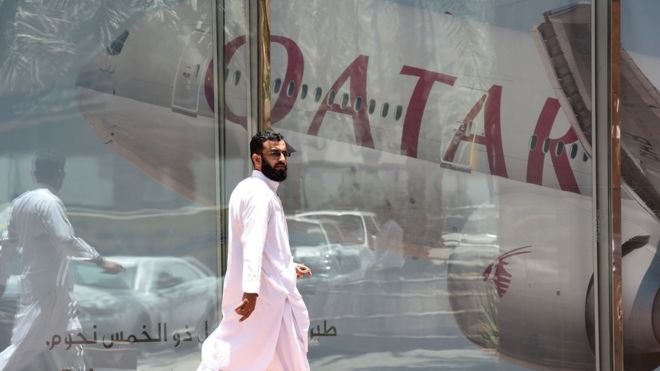 Emir Sheikh Tamim bin Hamad al-Thani said he was willing to discuss demands made by the Saudis and three other nations, Saudi’s SPA news agency says.

“During the call, the Emir of Qatar expressed his desire to sit at the dialogue table and discuss the demands of the four countries to ensure the interests of all,” SPA reported.

The news agency reported that details would be announced after Saudi Arabia reached an agreement with Bahrain, Egypt and the UAE.

However, shortly afterwards SPA accused Qatari media of trying to distort the facts about the phone call between the leaders, adding that any dialogue was now “suspended”.

The phone call came after US President Donald Trump spoke separately with the leaders of Saudi Arabia, the UAE and Qatar.

“The president underscored that unity among the United States’ Arab partners is essential to promoting regional stability and countering the threat of Iran,” the White House said in a statement.

It added that “all countries must follow through on commitments… to defeat terrorism, cut off funding for terrorist groups and combat extremist ideology”.

Saudi Arabia, Bahrain, Egypt and the UAE, who are blockading Qatar, have presented a list of conditions for the lifting of sanctions.

They include the closure of news broadcaster Al-Jazeera and reducing ties with Iran.

The group accuses the Qatari-funded channel of fostering extremism, a charge the network denies.

Saudi Arabia has closed its land border with Qatar, while all four countries have cut air and sea links with Doha.

Diplomatic efforts led by Kuwait and backed by Western powers have so far failed to end the dispute.