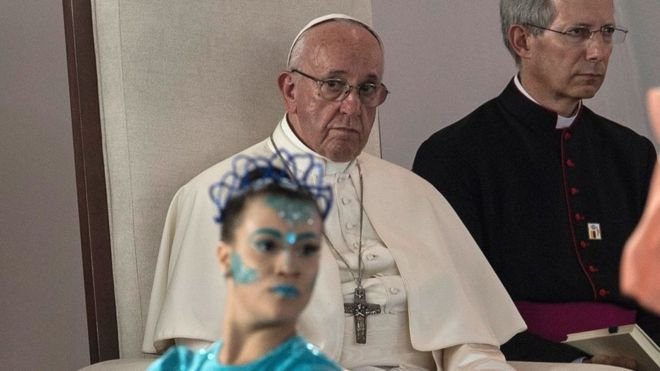 Pope Francis has condemned “verbal and physical violence towards women” and called for “respect” while addressing large crowds on a visit to Colombia.

The Argentine pontiff, the first Pope to visit the country in over three decades, said that the Bible celebrates women who are strong and influential.

“How many women, in silence, have persevered alone?” he asked those gathered in the city of Villavicencio.

The Pope is on a five-day trip to show support for the Colombia peace process.

He was repeatedly interrupted by applause as he told listeners at a huge open-air mass on Friday that many communities “are still weighed down with patriarchal and chauvinistic customs”.

The Pope has received a warm welcome in Colombia, a majority Roman Catholic country.

As the country prepares to reintegrate former members of the leftist Revolutionary Armed Forces of Colombia (Farc) back into society, the pontiff is urging reconciliation and forgiveness following decades of bloody civil war.

The crowd in Villavicencio on Friday included thousands of victims of the fighting.

During the homily, the pontiff beatified two priests killed during the conflict and warned those present that the peace process needed reconciliation in order to work.

The 2016 peace deal was narrowly rejected at first in a referendum. The government and the Farc then agreed a deal several weeks later, which was submitted to Congress rather than a second popular vote.

Since then, there have already been cases of murders of former Farc fighters.

Many hope that the Pope can help bring the country together again.

The Farc agreed to disarm and in June officially ceased to be an armed group.

The last papal visit to Colombia was in 1986.