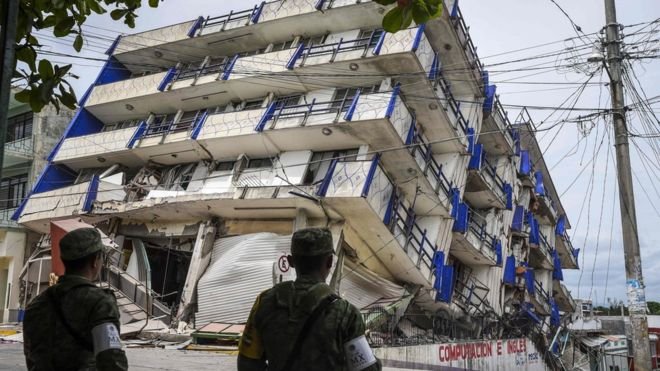 The number of people killed by a powerful earthquake off the southern coast of Mexico has risen to at least 58, officials say.

A huge rescue operation is under way in the worst-hit states of Tabasco, Oaxaca and Chiapas where people are feared trapped under rubble.

The 8.1-magnitude quake was the strongest to hit the region in a century.

Officials said 45 deaths had been reported in Oaxaca; 10 in Chiapas and three in Tabasco.

One of the worst hit towns was Juchitán, in Oaxaca, where at least 17 deaths have been reported. The town hall and a number of other buildings were destroyed or badly damaged.

“The situation is Juchitán is critical; this is the most terrible moment in its history,” said Mayor Gloria Sanchez.

The BBC’s Arturo Wallace says the affected region is the poorest and least developed part of Mexico and the full extent of the damage is yet to become clear.

At least one other person was killed in Guatemala, its president has said.

The huge quake struck at 23:50 local time on Thursday (04:50 GMT Friday), shaking buildings and causing panic hundreds of miles away in the capital, Mexico City.

It also triggered a tsunami warning and the evacuation of thousands of people in coastal communities in Chiapas. The warning was later lifted.

Throughout Friday, the region was shaken with scores of aftershocks.

President Peña Nieto’s office said he would travel to Chiapas to survey the damage.

Pope Francis, addressing an open air Mass on a visit to Colombia, said he was praying “for those who have lost their lives and their families”.

The earthquake was more powerful than the 1985 tremor that hit close to Mexico City and caused thousands of deaths. Correspondents say the death toll appears to have been lower because it struck less populated areas.

Journalist Franc Contreras, who was in Mexico City, told the BBC: “You could hear loud cracks in the concrete. It sounded like a giant wooden branch being just broken open violently.

“People were streaming out of the hallways. And everybody walking out single file into the streets, trying to avoid overhead power lines.”

The quake struck as Mexico faces the threat of Hurricane Katia on its eastern coast.

The category one hurricane is south-east of Tampico and has sustained winds of 140km/h the US National Hurricane Center says.