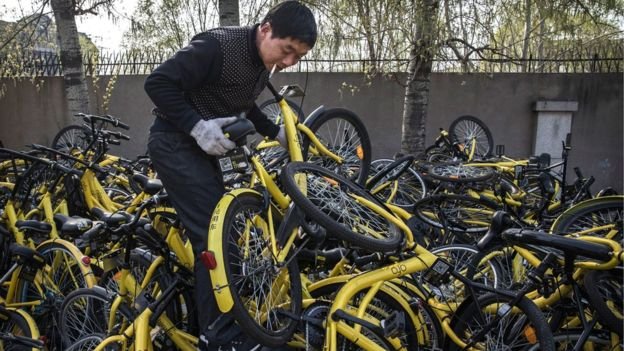 Beijing has become the latest city in China to ban new shared bikes as the country battles against two-wheel traffic chaos and safety concerns in urban areas.

New deliveries of bikes to the city’s 15 sharing schemes will be suspended, a government statement on Thursday said.

It joins other Chinese cities in trying to curb public hazards by banning new bikes to the popular schemes.

In the statement, the Municipal Transportation Commission also said it would begin efforts to clean up parking.

Bikes in big cities are often abandoned, thrown haphazardly on streets and curbs.

It said the Commission would look at regulating shared bike schemes, including guidelines for parking spaces.

Riders are able to access about 16 million vehicles nationwide in market dominated by Alibaba-backed Ofo and Tecent-funded Mobike.

But poor regulation has created mayhem on the country’s roads, with thousands of bikes discarded or dumped in already crowded public spaces.

In China, rather than having fixed docking stations, all the cycle share firms are app based.

In most cases, bikes are fitted with a GPS chip, allowing users to locate a bike. They pay for the hire with their smartphones and then unlock it – sometimes using a QR code.

Once they have finished the journey, customers can leave the bike anywhere.

That has led to some problems in cities, and Shanghai, Guangzhou, Shenzhen and Wuhan are among the places that have enforced bans on new share bikes.

Earlier this week, state media reported that the number of shared bikes in Wuhan’s urban districts was approaching 700,000, far exceeding the city’s capacity of 400,000.