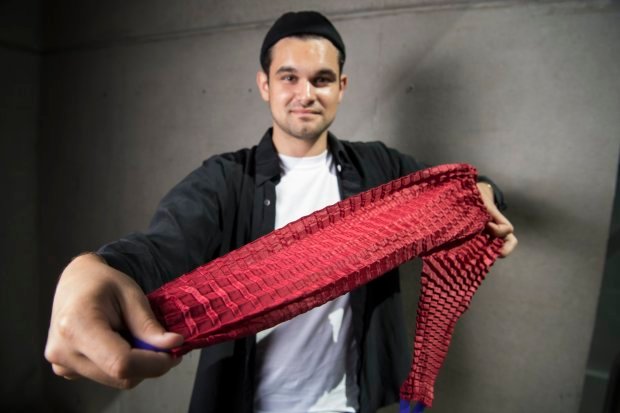 Parents spend more than $2500 on clothes for one child before they even reach the age of three.

It’s hard to avoid – they just grow up so fast. Literally.

However, this may not be a problem forever. One young inventor has designed clothes that grow with your child, meaning you don’t need to constantly splash out.

Ryan Yasin, a 24-year-old graduate from the Royal College of Art, has just won the James Dyson Award for his Petit Pli range of clothing that expands with the kid that wears it.

‘I invented a structure in the fabric, it’s kind of like origami – so it’s folded and compacted, and when it’s folded it grows and expands,’ he Yasin said.

The clothes have a hydrophobic coating which makes them waterproof, while the grid-like folds on the outerwear point downward to make any rain run straight off.

And they won’t lose their flexibility, because they’ve been treated with heat to stay permanently in place.

This includes washing – they’ve been designed to go through the wash cycle on a regular basis, while remaining durable and long-lasting.

The garments are mainly outerwear for the time being, as they’re made out of synthetic material that parents may not necessarily want against their kids’ bare skin.

But when it’s not being used, the jacket folds until it is small enough to fit into a parent’s pocket.

Children can start wearing Petit Pli clothes at the age of four to six months, he said, until about the age of three years.

‘It makes the most sense to start here, with this age group, because that’s the age kids grow at the fastest rate,’ Ryan explained.

Petit Pli took about a year for Ryan to develop before it was entered into the James Dyson Award.

Now that he’s won, Ryan will receive $2500, and Petit Pli will be entered into the international round of the competition.

Ryan said that, while he’s not a parent, he is an uncle – and he knows how difficult it can be to keep up with their fast-growing babies and toddlers.

‘I’m not a parent, but I am an uncle. I’ve also done engineering, and I’ve done a lot of research into origami,’ he said.

‘I wanted to go into the fashion industry, but in a sustainable way, and focusing on a specific user group – children.

‘They’re growing at such a fast rate, as opposed to adults, who are static in comparison.

‘Plus, children’s clothes are often just miniature versions of adult clothes, which I don’t really think is sensible.’

And it is designed with active, cheeky children in mind.

‘We personally see children as extreme athletes,’ he told Metro.co.uk.

‘We see them as the little rugrats that they are, not as little angels who are good and perfectly behaved all the time.

‘So the clothes are designed for them running around, and being little extreme athletes.’