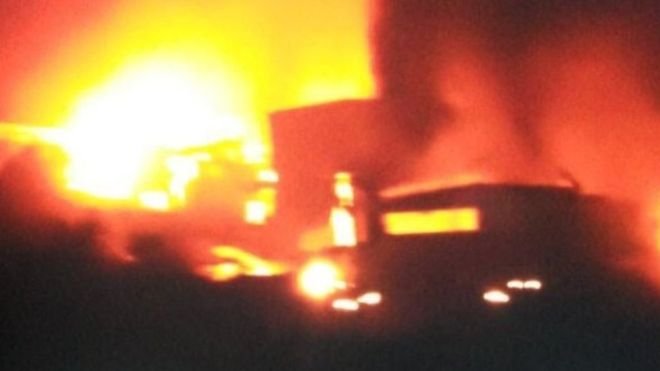 The Syrian army says Israeli jets have attacked a military base in the west of the country, amid reports of a strike on a suspected chemical weapons site.

Arab media and a monitoring group reported that a chemical weapons production facility was targeted.

Israel, which has carried out clandestine attacks on weapons sites in Syria before, has not commented.

An Israeli military spokeswoman declined to discuss the reports, saying it does not comment on operational matters.

The incident comes a day after UN human rights investigators said they had concluded a Syrian Air Force jet had dropped a bomb containing the nerve agent Sarin on a rebel-held town in April.

At least 83 people were killed in that attack, most of them women and children, according to the investigators.

Syrian President Bashar al-Assad has said the incident in Khan Sheikhoun – which prompted the US to launch a missile strike on an airbase – was a “fabrication”.

He has insisted his forces destroyed their entire chemical arsenal under a deal brokered by the US and Russia after a Sarin attack outside Damascus in 2013.

However, a Western intelligence agency told the BBC in May that the Syrian government was continuing to produce chemical munitions at three main sites – at Masyaf, and at Dummar and Barzeh, both just outside Damascus. All three are branches of the Scientific Studies and Research Centre (SSRC).

The SSRC is promoted as a civilian research institute by Mr Assad’s government, but the US accuses the agency of focusing on the development of non-conventional weapons and the means to deliver them.

Israel has sporadically carried out air strikes on sites in Syria in recent years.

It recently accused Syria of allowing Israel’s arch-enemy Iran to build missile factories there and says it aims to thwart the transfer of advanced weaponry from Syria to the Iranian-backed Lebanese militant group Hezbollah.

IS convoy in Syria desert stand-off