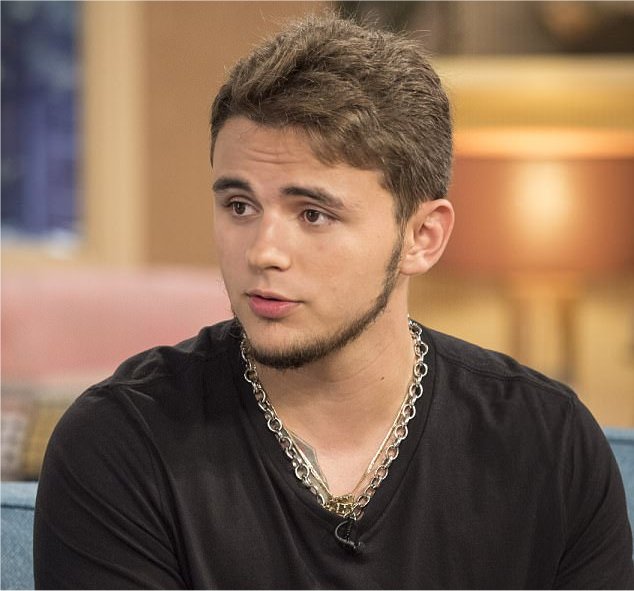 As the eldest child of the King of Pop, he has been incredibly private when it comes to his personal life.

And Prince Jackson, 20, looked in high spirits as he appeared on Monday’s episode of The Morning for his first UK interview to discuss growing up in the limelight with the late Michael Jackson and his siblings – Paris, 19, and Blanket, 15.

The producer was also ’embarrassed’ to admit that his inability to dance and sing like the icon has hindered his potential to ‘moonwalk’ like this famous father, while also confessing that Michael’s iconic Thriller video ‘scared’ him as a child.

Prince was just 12 years old when Michael passed away eight years ago and he has since kept a relatively low-profile.

But keen on focusing on happier days, when the global superstar was alive, Prince reflected: ‘He is the greatest parent, as role model, as an inspiration, as a motivator. He’s our rock and foundation.

His preference to stay out of the public eye stemmed from his early days where Michael was fiercely protective of their privacy.

Prince admitted that the scale of his dad’s fame only sunk in was when he watched videos of him performing at the age of nine.

‘I thought he was just normal. But then people were fainting and passing out.

‘Once at London’s Dorchester Hotel, there were lots of fans outside who were singing and chanting. Dad then sent hot chocolate and pizza to everyone outside.

He was also quizzed by an intrigued Holly and Phil on the masks they wore when they ventured out with Michael as children.

Without directly referencing the disguises, he admitted: ‘I’m a very a private person and I only reveal what I like to reveal.

‘That’s why I decided to go into production so I’m still behind camera.’

Prince is also keen on continuing his dad’s message of peace and love with the charity, Heal LA.

Heal LA was inspired by Michael’s ongoing charity work for children and hunger, and his song, Heal The World, which inspired the name Heal LA.

‘For him, his humanitarian work was more important than music. Music was an art and he enjoyed it, but he used it as platform to get message across. He wanted to Heal the world.

‘Heal LA focuses on child hunger, abuse and homelessness in LA area. You don’t need to be pop star, you can make a difference by going out there.

Prince now has his own production company called King’s Son and he admitted that it was Michael who educated him when it came to the entertainment business.

‘When I was younger he hired a professor who taught us framing, shots, composition, differed tracking shots. He wound turn the sound off on movies to show the importance of soundtrack and the visual aspect of the film,’ he admitted.

Prince also confessed that Michael was ‘extremely humble’ when it came to his own music video and didn’t like his children watching them.

However, that didn’t seem to apply to his Thriller music video, as Blanket admitted: ‘When it came to thriller, he scared us a lot saying things like “it’s a full moon tonight!”‘

As the eldest of three, Prince is very proud of his siblings as he admitted Blanket is ‘focusing on school’ with desires to become a director.

‘Dad always said it’s the three of you who are going to matter. He would be proud of actions me and my sister have taken.’

And while his dad Michael has left behind his legacy for many more years to come, Prince hilariously admitted that he hasn’t picked up his dad’s talents – which includes the famous moonwalk.

‘I can’t sing or dance, I’ve tried and its embarrassing!’ he revealed.