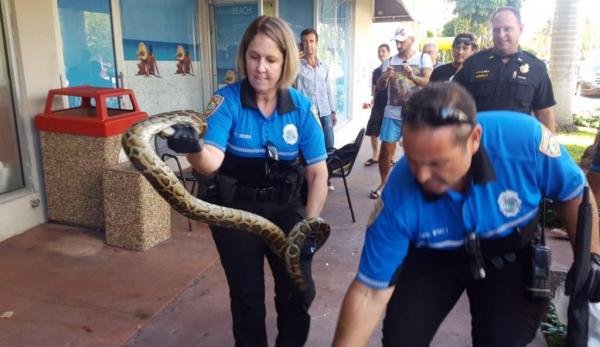 Miami Beach police found a 6-foot python slithering down a sidewalk of one of the city’s most popular tourist streets Wednesday afternoon.

The Miami Herald reported that people outside enjoying the late summer day spotted the snake lying under a palm tree.

“When I saw how huge it was, I freaked out. So did everybody else,” said Indika Wanigarathne, the owner of a cafe near where the python was found.

Onlookers quickly called police, but not every police officer was willing to handle the serpent.

“First a male officer came, and didn’t want to get too close, so a second male officer came and said hell, no, he wasn’t going to touch it,” Wanigarathne said. “Then a lady officer came and she was a genius. She didn’t panic. She put on gloves and picked up the python with her hands and put it in a little cooler. The guys gathered around were screaming but she was calm.”

A Miami Beach Police Department spokesperson said they were not sure where where the snake came from. But they did say the snake’s new home will be at the AA Nature Wildlife refuge group.

Geneva toilets clogged up with more than $95,000 in cash