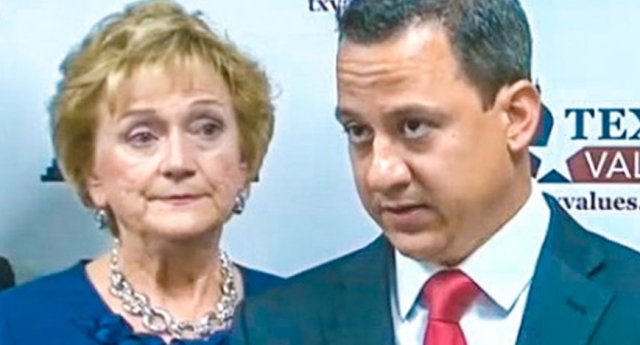 Jonathan Saenz is a conservative Catholic attorney who is the president of Texas Values, an anti-abortion, anti-LGBT group “dedicated to preserving and advancing a culture of family values in the state of Texas.”

In August 2011, he was hit with divorce papers from his now ex-wife, Corrine Morris Rodriguez Saenz, after nearly 10 years of marriage. Those court papers, obtained by Lone Star Q, reveal Rodriguez left Saenz for a woman named Ercimin Paredes.

Rodriguez and Paredes both taught at Becker Elementary School in Austin. Saenz alleged in court records that Rodriguez was “deeply involved in her relationship with Ms. Paredes as early as the fall of 2010.” In a divorce counter-petition filed by Saenz in May 2013, he accused Rodriguez of adultery and wanted Paredes banned from being in the presence of his and Rodriguez’s two children.

Lone Star Q reports Saenz’s attorney “made discovery requests and issued subpoenas seeking information about Corrine Saenz’s relationship with her girlfriend.” Saenz sought to have Paredes barred from the courtroom during the divorce proceedings. The divorce was finalized last year.

Saenz is a vocal opponent of marriage equality who has suggested same-sex marriage support could apply to polygamy or incest and may lead to the jailing of “thousands and thousands” of pastors. He has also championed gay conversion therapy.

Teen spends 99 cents for ‘nothing’ at McDonald’s