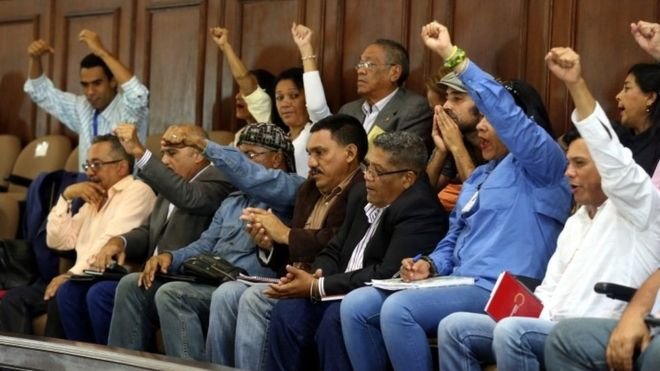 The assembly said it would pursue those it accuses of supporting US economic sanctions against the country.

Washington approved the measures last week in response to what it called the “dictatorship” of President Nicolás Maduro.

President Maduro has accused the US of trying to cripple Venezuela’s economy amid an ongoing economic crisis.

US President Donald Trump signed an executive order on 25 August to ban trade in Venezuelan debt or the sale of bonds from its state oil company.

His reasons included “serious abuses of human rights” as well as the creation of the “illegitimate” constituent assembly, which the US accuses of usurping the democratically elected parliament.

The constituent assembly, which was convened by President Maduro and is made up of government supporters, has been condemned by international leaders as unconstitutional.

On Tuesday, members of the assembly unanimously approved a decree calling for the investigation of “traitors” who supported the economic sanctions.

During the three-hour session, they took turns denouncing those who have been critical of the government in ever more colourful language.

Among those they attacked for allegedly being “engaged in the promotion of these immoral actions against the interests of the Venezuelan people” were not only members of opposition parties but also former supporters of the socialist government.

The sacked chief prosecutor Luisa Ortega, who over the past months has become one of the most vocal critics of the government, came in for particular vitriol.

Constituent assembly member Iris Varela called Ms Ortega “scum”. She also said that Ms Ortega “crawled like a worm” and “sold her homeland for a few dollars she stole from this country”.

Ms Ortega was sacked by the constituent assembly in its first session earlier this month and replaced by a loyal government supporter, Tarek William Saab.

She has since travelled to a number of Latin American countries denouncing alleged government corruption in Venezuela.

The head of the opposition-controlled parliament, Julio Borges, was named as “one of the real enemies of Venezuela” for asking US bank Goldman Sachs to stop buying Venezuelan bonds.

Mr Borges reacted by saying that it was time the government stopped looking for others to blame for Venezuela’s economic and political crisis.

“The only one responsible is Maduro and it’s time he takes a look in the mirror and accepts he has ruined Venezuela,” he told reporters.