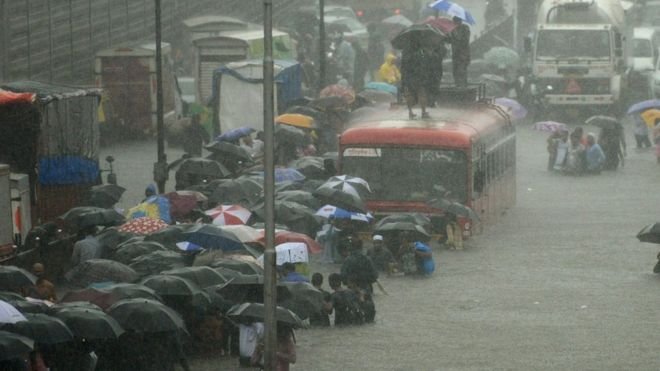 Monsoon rains have killed at least five people, including two toddlers, in Mumbai as India’s financial capital ground to a halt under flooding.

More rain is expected but the situation has improved for now, the BBC’s Suranjana Tewari says.

The rains in Mumbai follow devastating floods across a swathe of South Asia, which have killed more than 1,200.

At least 500 of the deaths happened in the northern Indian state of Bihar, according to officials.

Mumbai has seen a slow return to normalcy, although schools and offices remain closed on Wednesday.

Residents took to social media to offer shelter to the stranded, or to ask for help.

People opened up their homes to strangers, using the hashtag #RainHosts, along with their contact details.

The AFP news agency quoted a local official as saying that they were monitoring the situation.

The International Federation of Red Cross and Red Crescent Societies (IFRC) has called the South Asian floods one of the worst regional humanitarian crises in years.