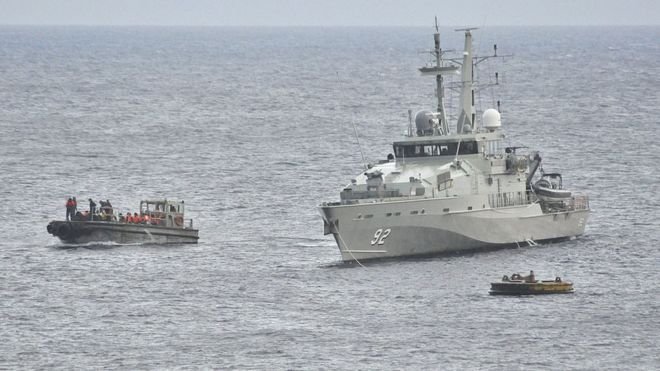 Two others on board, a Chinese man and a PNG man, were charged with people smuggling, Australian authorities said.

The boat made it to land on Australia’s Saibai Island, 4km (2.5 miles) from PNG, on 20 August, local media said.

On Monday, Australia’s immigration minister said no smugglers had reached the nation in “well over 1,000 days”.

In a statement on Wednesday, immigration authorities said the Chinese men had been “attempting to illegally enter Australia” in the Torres Strait. It did not make clear whether they had reached land.

The Australian Broadcasting Corp reported that no-one on board had made a claim for asylum.

Australia has tough and often controversial border policies, including holding asylum seekers who arrive by boat in offshore detention centres and turning back suspected people-smuggling vessels.

Foreign Minister Julie Bishop said the latest boat did not represent a fresh wave of asylum seeker arrivals in Australia.

“We have very good border security strategies in place and these people were detected,” Foreign Minister Julie Bishop told the local Nine network.

The two men charged with people smuggling offences faced a court in the Queensland city of Cairns on Tuesday. They will face another hearing next month.

Last year, the government would not confirm reports that 12 Sri Lankan asylum seekers had arrived in the Cocos Islands, an Australian territory in the Indian Ocean, saying it did not comment on “operational matters”.