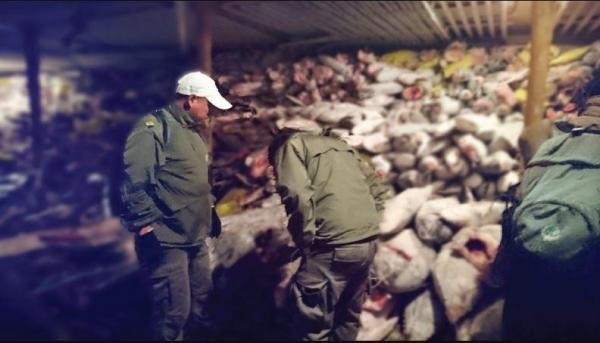 An Ecuadorean judge sentenced 20 Chinese fisherman Monday to up to four years in prison and fined them more than $5 million for illegally fishing more than 6,000 sharks in the Galápagos Marine Reserve, where fishing is strictly prohibited.

The sentence was praised by Ecuadorean environmental officials, who have condemned the ongoing illegal fishing in waters near the Galapagos Islands.

“The sentence marks a milestone in regional environmental law and an opportunity to survive for migratory species,” the Ecuador’s Ministry of Environment said in an official statement.

“Zero tolerance for environmental crimes!” tweeted Tarsicio Granizo, the Environment Minister of Ecuador, after the judgment was announced.

Ecuadorean officials have used the arrest to push the Chinese government to do more about illegal fishing vessels originating from China. But China has pressed back against the conviction of the fishermen.

Chinese Foreign Ministry spokeswoman Hua Chunying said at a press conference Tuesday that they do not condone illegal fishing, but were investigating the Galapagos incident before making a final determination on the guilt of the fisherman.

“Judging from the information gleaned from the two sides, there has been no evidence proving that the vessel was engaged in fishing and transporting in the Ecuadorean waters,” she said.

The Chinese fisherman aboard the Fu Yuan Yu Leng 999 were arrested in Ecuadorian waters on August 13 with more than 300 tons of sharks and other sea creatures caught in the Galápagos Marine Reserve waters in what has been described as the biggest illegal catch ever intercepted by the Ecuadorean government.

“There were thousands, if not tens of thousands, of sharks,” marine ecologist Pelayo Salinas, told National Geographic at the time of the arrest. “This is going to be historic. The biggest seizure of sharks in the history of the Galápagos, for sure.”

US reveals details of recent ‘sonic attack’ on Cuba diplomats