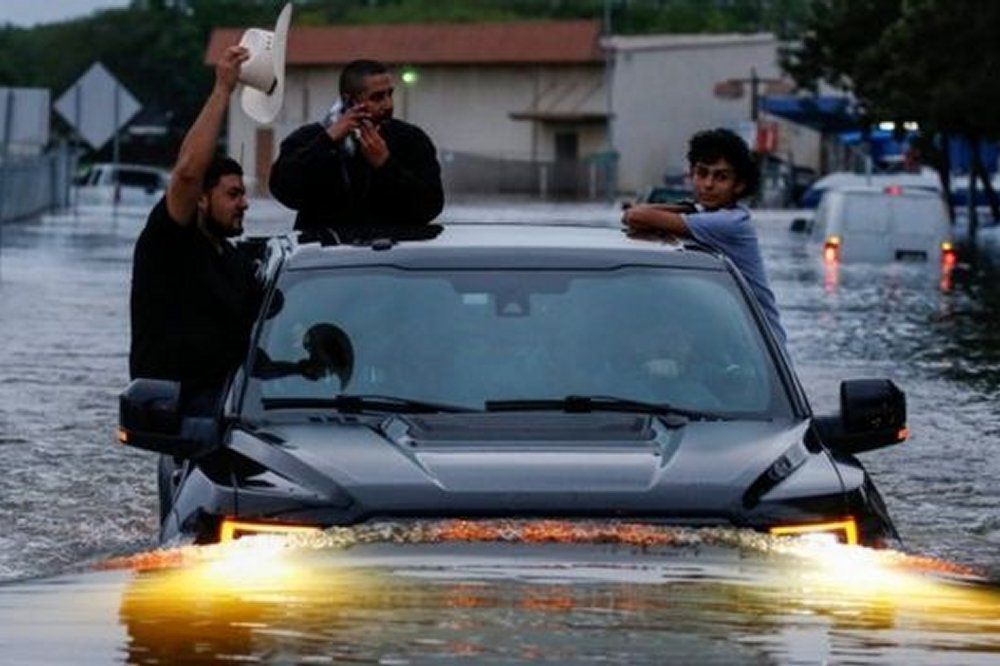 The US city of Houston is in the grip of the biggest storm in the history of the state of Texas, meteorologists say.

More than 30in of rain (75cm) of rain has fallen on parts of the city this weekend, turning main roads into rivers and making it impossible to move around other than by boat.

The city is expected to be deluged by a year’s rainfall within this week.

With rescue services overstretched as the rain continues, many people are having to fend for themselves.

Hundreds of roads have been closed across the city, hospitals have been evacuated and thousands of people are without electricity.

There has been a new round of school closures and all commercial flight operations from the city’s two main airports have been stopped until further notice, with runways completely flooded.

Up to 2,000 people have been rescued from floods in and around Houston, as Tropical Storm Harvey continues to batter Texas with heavy rains. Helicopters are being used to pluck people from rooftops.

There are reports of possible deaths in submerged vehicles, but investigations continue, Chief Darryl Coleman of the Harris County Sheriff’s Office said.

Texas Governor Greg Abbott told the media he could not confirm reports of several storm-related deaths.

It said there was a “flash flood emergency” across the Houston Metro area, with travel near impossible.

Many shelters have been opened, including in a convention centre.

The Houston Chronicle has published a photo of an unidentified man in Houston trying to catch a fish as he wades through floodwaters in his living room.

One woman posted a picture online of two alligators in her back yard, while other photos show people water skiing near the centre of the city.

Like Houston, the island city of Galveston was also hit by “epic catastrophic flooding” overnight, the NWS added.

An inundated care home in Dickinson, Galveston County, is reported to have been evacuated by helicopter after an image of several elderly women sitting in a lounge in waist-deep water went viral on social media.

The creeks and waterways that criss-cross the Houston area have steadily been getting fuller since Tropical Storm Harvey first hit the area on Friday.

Many areas are flooded or face flooding throughout the next week, the National Weather Service’s Advanced Hydrology Prediction Service says.

There is little sign of any major improvement in the weather over the next seven days, forecasters say.

With the emergency services under intense pressure and complaints among some residents that 911 emergency calls are not even being answered, hundreds of volunteers have made their way to Houston from all over the US.

They face difficult conditions because many of those stranded can only be rescued by air or by boat.

The US Coast Guard in Houston has requested more helicopters.

President Donald Trump is due to visit Texas on Tuesday to see for himself the damage caused by the storm. He signed a disaster proclamation on Friday, paving the way for federal cash to go towards the relief effort.

Forecasters have warned that it could worsen and become historic.

Insurance experts quoted by the Reuters news agency say it could equal the damage inflicted by Hurricane Katrina in 2005, widely reported to be the most expensive natural disaster in US history.

It was estimated that Katrina caused about $15bn worth of flood damage in the states of Louisiana and Mississippi.

But experts say at the moment it is too early to make detailed estimates of the damage to homes and businesses in Texas.

Houston Mayor Sylvester Turner has urged residents not to call emergency services unless their situation is life-threatening and they need to be rescued.

“Don’t get on the road. Don’t assume this storm is over,” he said.

Officials in Harris County, of which Houston is the county seat, have asked people who own boats to help with rescues.

One of the oldest oak trees in the US has survived the storm, Texas parks officials have said.

It stayed standing while other trees were blown over, the Texas Parks and Wildlife Department said.

“You don’t get old by being weak,” the department said on its website.

A plaque at the front of the tree reads: “I am a live oak tree and I am very old. I have seen spring return more than 1,000 times. I can remember hundreds of hurricanes, most I’d rather forget, but I withstood.”

Rescue efforts are also being hampered by strong winds. with some predictions that there will be a further 40in of rain before the storm subsides.

Houston is the country’s fourth biggest city, with 6.6m people living in the metropolitan area.

Meanwhile, Exxon Mobil has said it is shutting down the second-largest refinery in the country, at Baytown. The Texas Gulf Coast is a key centre of the US oil and gas industry.

Harvey began as a major category four hurricane – the first to make landfall in the US in 13 years when it arrived late Friday – but was downgraded to a tropical storm later on Saturday.

It is forecast to meander across south-east Texas until Wednesday.

US storm to bring catastrophic flooding