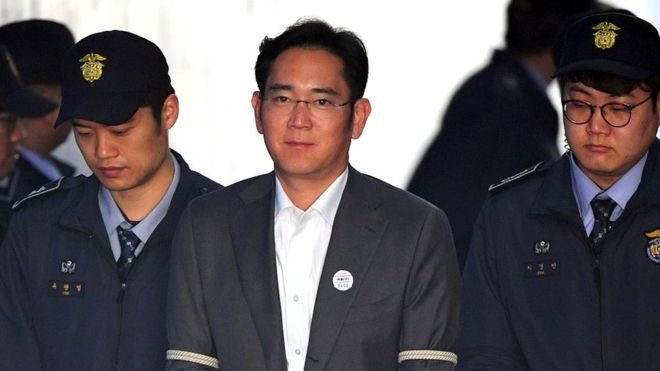 A court in South Korea has sentenced Samsung’s billionaire heir-apparent Lee Jae-yong to five years in prison for corruption.

Mr Lee was accused of bribery in a scandal that also saw the impeachment of South Korea’s former president.

The case has gripped the public amid growing anger against South Korea’s biggest companies, known as chaebols.

Mr Lee, who denied all charges, had faced a jail sentence of up to 12 years.

Also known as Jay Y Lee, the de facto head of the world’s largest smartphone maker had been detained since February on a string of corruption charges.

These included including bribery, embezzlement and hiding assets overseas.

The 49-year-old was accused of giving donations worth 41bn won ($36m; £29m) to non-profit foundations operated by Choi Soon-sil, a friend of South Korea’s former President Park Geun-hye, in return for political favours.

Prosecutors said the donations were made to Ms Park’s confidante to win government support for a big restructuring of Samsung that would strengthen Mr Lee’s control over Samsung Electronics.

A lawyer for Mr Lee has said already said they will appeal against the decision.

“We are confident the ruling will be overturned,” lawyer Song Wu-cheol told reporters after the ruling, according to Reuters.

Nevertheless this ruling represents a huge blow to South Korea’s biggest and most well-known business empire. Since the verdict, Samsung shares fell by 1%.

The conviction raises questions about Mr Lee’s leadership of the conglomerate. He has been standing in as chairman since his father, Lee Kun-hee, suffered a heart attack in 2014.

The Samsung scandal contributed to President Park’s eventual impeachment. Her friend Choi Soon-sil has already been jailed for three years for corruption.