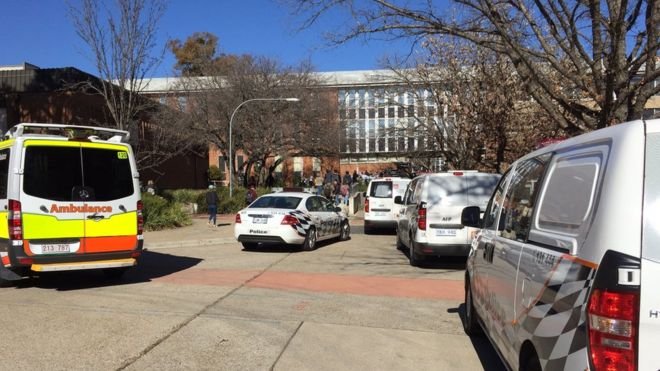 Four people have been injured by a student wielding a baseball bat in a classroom at an Australian university, according to police.

The suspect, an 18-year-old man, had been seated when he rose and assaulted a lecturer at the Australian National University in Canberra, police said.

He then allegedly attacked students who went to her aid, before being subdued.

Police said it was too early to determine a motive for the attack. The suspect was not known to authorities.

“I believe one the students has actually taken the baseball bat from the student with it, and run away with it, and then returned later and given it to police,” he said.

Three women and a man were taken to hospital with injuries not considered to be life-threatening, police said.

Detective Supt Cartwright said the suspect was not known to police or intelligence agencies.

“It is too early to know the motivation behind this alleged assault and at this stage [police] have not ruled anything out,” he said.

The university’s deputy-vice chancellor, Marnie Hughes-Warrington, called it an “isolated and random incident”.

“The second thing I want to do is to acknowledge the remarkable bravery of our students and our staff during this incident,” she said.