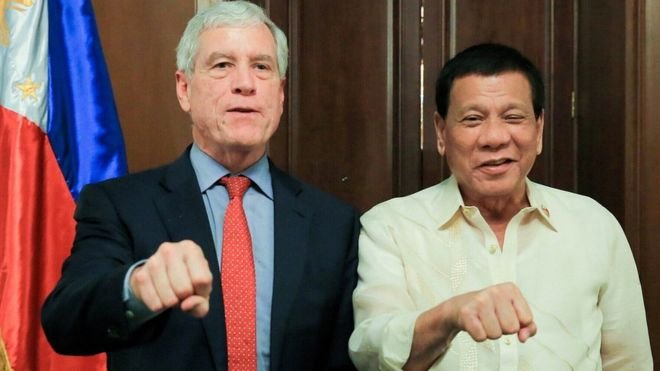 The boss of Australia’s foreign intelligence agency has been criticised for clenching his fist in a photo with Philippines President Rodrigo Duterte.

Mr Duterte used the pose in his 2016 presidential campaign, a symbol of his tough and controversial crime policies.

The Australian government said the photo was not Mr Warner’s idea.

Mr Duterte has been condemned by human rights groups for his crackdown on drugs in the Philippines, which has seen thousands of people die at the hands of police.

The drug war has sparked civil unrest and protests against Mr Duterte’s presidency, as well as criticism from community leaders.

Photos of the meeting between Mr Duterte and Mr Warner at Manila’s Malacanang Palace were shared on the president’s Twitter account.

“Sickening to see head of Australia’s spy agency fist-bumping a man who has instigated the killing of thousands,” she wrote online.

“You wouldn’t pose like this with a mass murderer. And one day, Duterte may be indicted for crimes against humanity.”

Australian MP Anthony Byrne said the photo was “completely inappropriate for the head of one [of] our most important intelligent services to be in”.

However Australian Foreign Minister Julie Bishop, whose department oversees Asis, said she was “confident it would not have been his [Mr Warner’s] idea”.

“I do not know the details of how it came about or who released the photograph,” she said.

“But of course the Australian Secret Intelligence Service is called a secret intelligence service for a reason. Preferably the work that Asis does is below the surface but there are instances where it comes public.”

Earlier this week, Ms Bishop told Fairfax Media that Australia was deeply concerned about extra-judicial killings in the Philippines.