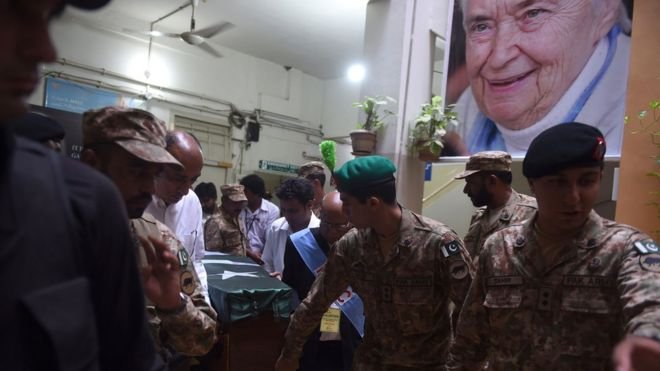 A state funeral has been held in Pakistan for a German doctor and nun who devoted her life to battling leprosy.

Ruth Pfau, who lived in Pakistan for more than 50 years, set up 150 leprosy clinics across the country.

Her efforts meant that in 1996 the disease was declared to have been brought under control.

A member of staff at Dr Pfau’s national leprosy centre, Yasmeen Morris, said her death was “a big loss to humanity”.

She said: “It is very hard to find a person like her in today’s era.

“Today, everyone thinks about themselves, but she never thought about herself. She led a very simple life and she loved humanity.”

She was laid to rest after a funeral service at St Patrick’s Cathedral in Karachi, where the coffin was draped in the Pakistani flag and covered with rose petals.

After her death, Prime Minister Shahid Khaqan Abbasi said Dr Pfau “may have been born in Germany, but her heart was always in Pakistan”.

“Dr Ruth came to Pakistan here at the dawn of a young nation, looking to make lives better for those afflicted by disease, and in doing so, found herself a home,” he said.

Dr Pfau witnessed leprosy in Pakistan for the first time while working as a medical missionary in the 1960s.

She set up 150 clinics across the country which treated tens of thousands of patients.

She received numerous honours for her work, including the Hilal-e-Imtiaz, Hilal-e-Pakistan and the German Staufer Medal.

Ten missing in US destroyer collision