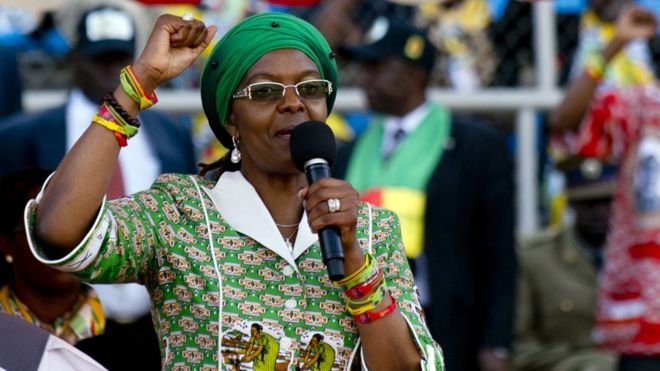 The wife of the Zimbabwean leader, Robert Mugabe, has failed to appear at the start of a regional leaders summit in South Africa.

Grace Mugabe, 52, is claiming diplomatic immunity after she was accused of assaulting a model last week.

She had been due to take part in the first ladies’ programme at the summit.

The authorities say she remains in South Africa and her request for immunity is under consideration.

Police want to interview Mrs Mugabe about an alleged assault at a hotel in Johannesburg.

She is accused of hitting a 20-year-old woman over the head with an extension cord.

Police expected her to turn herself in on Tuesday, but she failed to show up.

They set up a “red alert” at the country’s borders to try to ensure she does not flee the country.

Police Minister Fikile Mbalula said: “We, in terms of South African police, [have] already put tabs on the borders in relation to her leaving the country, so there is no question about that.

“So tabs have been put, a red alert has been put, so she is not somebody who has been running away.”

South Africa Airlines, which is owned by the South African government, says its flight from Zimbabwe’s capital to Johannesburg was unable to take off as scheduled on Saturday morning.

The airline says Zimbabwean authorities are demanding a “foreign operators permit” to allow them to operate in Zimbabwe, despite the fact the route has operated for more than twenty years without one.

The restrictions come as South Africa’s government considers whether to grant diplomatic immunity to Mrs Mugabe.

The first lady’s whereabouts are not known but she is believed to still be in South Africa.

Mrs Mugabe has not commented on the allegation.