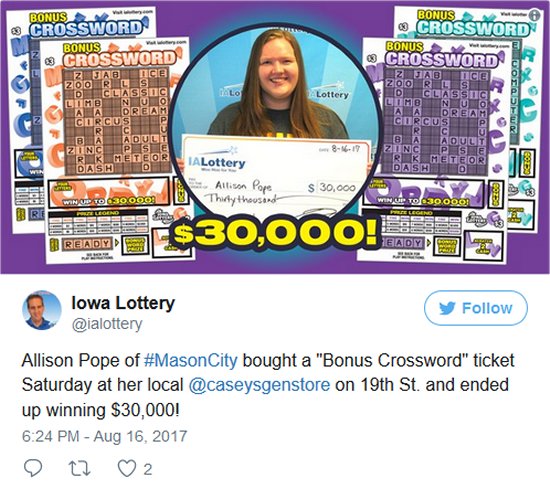 An Iowa woman’s attempt to cash in a winning lottery ticket for $3,000 failed for an unexpected reason — her prize was actually $30,000.

Allison Pope, 23, of Mason City, said she scratched off her Bonus Crossword ticket from the Iowa State Lottery and was excited to see that she had won some money.

“I went home and I was scratching off the ticket and I saw that I had nine words crossed off so I realized I won $3,000 and I was super excited,” Pope said.

Pope said she ran into an unexpected hiccup, however, when she tried to have her winnings verified at a local lottery office. She said the woman at the counter told her that the ticket was worth 10 times the $3,000 prize she had been expecting.

“When the lady handed the ticket back to me, I was shaking,” Pope said. “She was like, ‘Are you going to pass out?'”

“I’ve always had big dreams of getting a big winner like this,” she said.