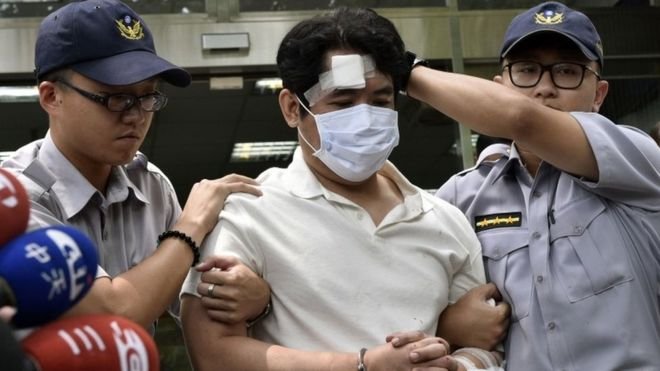 A man has been arrested in Taipei after injuring a military policeman outside Taiwan’s presidential building using a samurai sword.

The man, surnamed Lu, allegedly stole the sword from a museum. He was carrying a Chinese flag and told police he was expressing his political views.

The injured guard was taken to hospital and is in a stable condition.

Taiwan is self-ruling but is considered by Beijing to be a breakaway province which will one day rejoin the mainland.

A police official told AFP that Lu, aged 51, told them he had used a hammer to smash a display case in a history museum to steal a samurai sword.

Security officials stopped him as he was attempting to break into the palace, they said. He then slashed or stabbed the guard on his shoulder.

His motives and intentions were not clear but police said a Chinese national flag was found in his backpack.

“He said he wanted to express his political stance by going to the presidential office,” the official told AFP.

Taiwan’s Defence Minister Feng Shih-kuan said there had been an event for palace workers and their families going on at the time, and thanked security guards for their actions.

“I can’t imagine what the outcome would have been if he were to get in with the sword,” he told reporters.