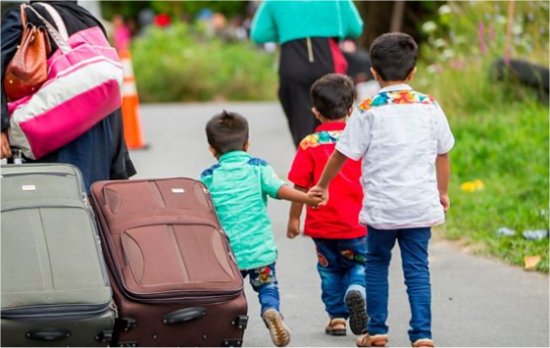 Over 3,800 migrants crossed illegally into the Canadian province of Quebec in the first two weeks of August.

That is well over four times the number of asylum seekers that arrived in Quebec from the United States in the month of June.

Canada has had a surge of refugee claimants in recent months, especially into the French-speaking province.

It is trying to stem the tide with the warning that landing in Canada is not an automatic ticket into the country.

Both provincial and federal officials are concerned that misinformation about Canada’s refugee system is being propagated through social media, helping fuel the influx.

“Asking for asylum in Canada is not a guarantee for permanent residence in Canada, and it’s extremely important we stress that,” Louis Dumas, a spokesman for Canada’s immigration department, said on Thursday.

A majority of those arriving in the current wave are from Haiti and were living legally in the US.

In May, US President Donald Trump announced that the US would end the programme that extended temporary protection from deportation to Haitian citizens after the devastating 2010 earthquake. That protection is due to expire in January 2018.

Canadian officials noted that just about 50% of refugee bids by Haitian nationals in 2016 were successful, and the rest of the people were deported.

Montreal temporarily opened its Olympic Stadium as a shelter to host the sudden increase in asylum seekers, and provincial resources are being strained by the numbers.

The Canadian military has built a camp to temporarily house those who have crossed until they have been processed by law enforcement and immigration officials.

The camp would house up to 500 asylum seekers in Saint-Bernard-de-Lacolle, Quebec, near Plattsburgh, New York.

Federal Transportation Minister Marc Garneau, speaking on Thursday at the border at Saint-Bernard-de-Lacolle, said the government is able to manage the situation despite the fact “it’s out of the ordinary”.

Once in custody, migrants are identified, searched and screened. If they are eligible to make an asylum claim, they are allowed entry and referred to the Immigration and Refugee Board of Canada.

Between 1 January and 31 July, more than 7,500 people crossed into Canada illegally seeking refugee status, 6,360 of them to Quebec.

Ahead of NAFTA talks, Canada looks to U.S. Midwest