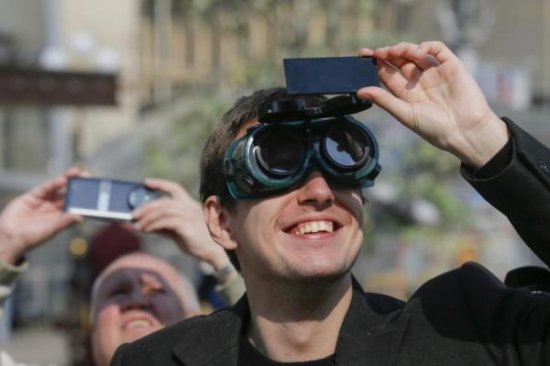 An estimated 220 million people will watch Monday’s eclipse. For a small percentage, the phenomenon will be more than a spectacle. It will be a chance to observe and record — for science’s sake.

Researchers at NASA are counting on the participation of thousands of citizen scientists to document next week’s solar eclipse and to gather usable data for additional research.

Scientists want to find out how the brief disappearance of the sun will alter clouds, weather, plants, animals and more. The event — and the data gathered before, during and after — is expected to inspire studies by biologists, astrophysicists, sociologists, meteorologists and scientists from many other fields.

Those who download the GLOBE Observer Eclipse app, register, and procure a thermometer will be able to log geolocated air temperature readings during the eclipse. The app will also help participants document cloud type and cover before, during and after the event.

Cloud and air temperature data collected using the app will be publicly available for students and researchers to use as they wish, but several NASA scientists will use the observations to better understand Earth’s energy budget, the balance between the solar energy absorbed and reflected by Earth.

Some observations are likely to end up on YouTube before they find their way into prestigious science journals.

More than 1,000 DSLR camera users have volunteered to share their eclipse photographs with scientists working on the Eclipse Megamovie project. Organizers are still looking for more citizen photographers to sign up.

Megamovie scientists will stitch together images to form a high-definition movie — a moving collage showcasing the eclipse as it was seen across the country.

Hugh Hudson, a research physicist at the University of California, Berkeley’s Space Sciences Laboratory, dreamed up the project.

“My colleague Scott McIntosh and I listened to a presentation on eclipse science by Shadia Habbal, and we kind of simultaneously whispered ‘let’s make a movie!’ to each other,” Hudson said of the moment the idea hit them.

“The movie idea originally was just for outreach, and it has been and will be a powerful tool, but we also — being scientists — have figured out very good and novel science to do this way,” he added.

Those without a DSLR camera can participate using a smartphone. The Eclipse Megamovie Mobile app will walk users through the point and shoot process. Smartphone images of the eclipsed sun will be used to study how the corona changes over time.

The Eclipse Soundscapes project was inspired by a deaf librarian who asked organizer Henry “Trae” Winter what a solar eclipse was like. After he realized nothing he was telling her was registering, he asked one of his colleagues for help. Winter’s colleague relayed a story of a quiet field becoming flooded, the sounds of chirping crickets, and the croaking of frogs as the moon passed in front of the sun.

Many eclipse viewers have experienced similar sonic transformations — birds going quiet, others erupting in song, ants stopping in their tracks.

“Not all species have as strong a circadian clock as humans do,” said Winter, a solar astrophysicist at the Harvard-Smithsonian CfA. “But these are just stories, these are just pieces of anecdotal evidence. We want to bring those stories into the scientific realm so we can test and measure them and see how much these soundscapes truly change.”

Winter and his colleagues have recruited thousands of citizen scientists to record soundscapes before during and after the eclipse.

For some of the participants, this won’t be the first recording session. It’s a serious pursuit, requiring serious — and expensive — equipment, including microphones that cost thousands of dollars. But would-be acoustic scientists can send in soundscapes recorded on cassette tapes.

Winters and his colleagues want all the data they can get.

“We hope to have thousands of actual sound recordings of different locations and different species all over the country,” he said.

Recordings from both inside and outside the path of totality — the coast-to-coast, 70-mile-wide path in which the sun will be entirely blocked by the moon — will allow scientists to determine how much of an eclipse is necessary to trigger “the dark-light, night-day confusion among crickets and frogs.”

The recordings of citizens will be supplemented by the work of highly trained acoustic scientists.

“The National Park Service is helping us out with this. They have an amazing team of researchers,” Winter said. “The Natural Sounds and Night Skies Division has teams working in 16 parks along the path of totality.”

How will city streets sound as the daytime sky grows dark?

“I’m hoping some anthropologists and sociologists look at human interactions and responses and make comparisons between the two,” he said.

While Winter has worked to organize related citizen science efforts, his main focus on the Eclipse Soundscapes project has been developing a way for blind and visually impaired people to experience the eclipse through sound and touch. Winter and his colleagues built an app that will offer real-time narrations of the phenomenon. The app also has a tactile component that the uses a smartphone’s vibration feature to relay the movement of the moon across the sun’s face.

Winter’s commitment to accessibility extends to the project’s citizen science components, too.

Almost of all the data collected through NASA’s litany of citizen science programs will be made publicly available in the weeks following Monday’s eclipse. But Winter and his colleagues are taking the extra steps to ensure their data will accessible to the visually impaired.

The blind and visually impaired use specific search techniques to navigate online sources and Internet databases.

“Adding lots of tags and metadata to your data is the best way to help them conduct efficient searches,” Winter said. “Adding that rich metadata is one of the key features we’re going to be doing and working on post-collection.”

NASA’s outreach and engagement efforts have the potential to inspire one of the largest citizen science efforts in history. And it could just be a precursor of what’s to come.

“Really, this is kind of a dry run for the next eclipse, which will happen in 2024,” Winter said.

Related Topics:NASAScienceSolar eclipse
Up Next