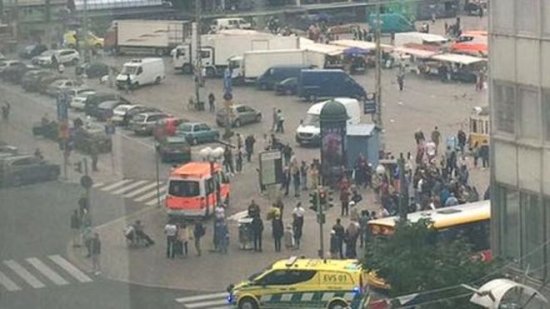 Police in Finland say they have shot a man who reportedly stabbed several people in the south-western city of Turku.

The man has been taken into custody after being shot in the leg, police say.

Police have warned other attackers may remain at large, and asked people to stay away from the city centre.

The incident reportedly took place in the Puutori-Market Square area. One image showed a body on the ground.

Finnish broadcaster YLE said at least two other people had been injured in the incident.

Other reports spoke of five or six victims. There has been no official confirmation of casualties.

The Turun Sanomat newspaper said several ambulances were at the scene and police were carrying out checks on public transport.

Eyewitness Jesse Brown told the BBC: “I saw police shoot a person, a man I think. People were running and there was talk about a knife attack, possibly multiple perpetrators.”

A later Twitter post by police read: “The police are searching for possibly more perpetrators in Turku.”

Briton Lee Hills, from Sunderland, sent the BBC a photograph of the scene of the incident. He was being kept in police lockdown in a pub about 200m from the scene.

Another witness, student Anttoni Numminen, said he had been playing pool in a bar when he heard gunshots. People began rushing into the bar, he said, and “the place immediately went on lockdown.”

“We are getting messages from family and friends that there were people with knives,” he said.

Finland’s Prime Minister Juha Sipila said his government was monitoring the situation closely. The interior minister and national police commissioner also said they were travelling to the city.

Bigger attacks were prepared on Barcelona