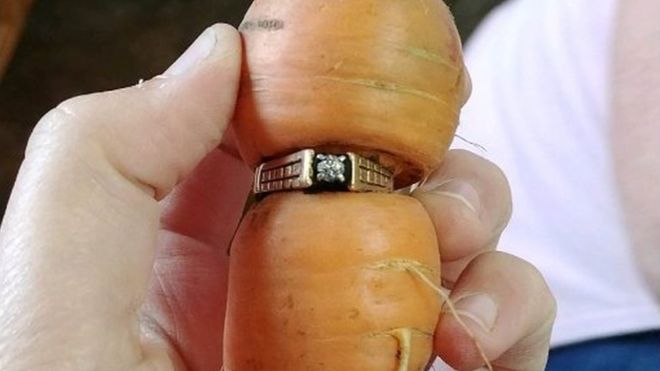 A Canadian woman got an extra carrot with her diamond ring when it was found in her vegetable patch 13 years after she lost it.

Mary Grams, 84, was devastated when she lost the ring while weeding on the family farm in Alberta in 2004.

But she had kept the ring’s loss a secret from all but her son for more than a decade.

On Monday, her daughter-in-law discovered the secret – and the ring – when she pulled up a lumpy carrot.

The carrot had grown straight through the ring, enabling it to be plucked out after many years hiding in the soil.

She had decided not to tell her husband when she lost it, out of embarrassment, but she told her son.

She went out and bought a slightly cheaper replacement ring, and carried on as if nothing had happened.

“Maybe I did the wrong thing, but you get so worked up,” she said.

No one was the wiser, until this week when her daughter-in-law Colleen Daley decided she wanted some carrots for supper.