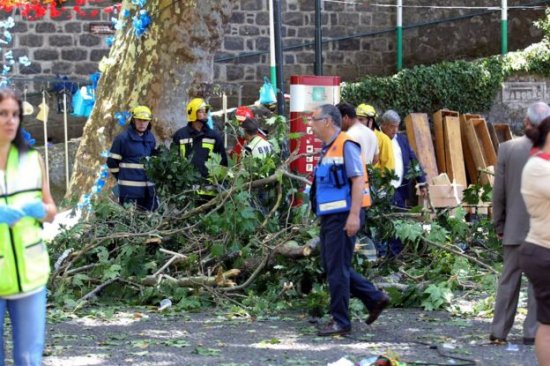 A falling tree has killed at least 13 people and injured 49 at a religious ceremony on the Portuguese island of Madeira.

A video shows the tree crashing down on a crowded square in a suburb of the main town, Funchal, spreading panic among people enjoying the festivities.

Two children are reported to have been killed, and some of the injured are said to be foreign nationals.

Reports suggest the tree which fell was an oak that was about 200 years old.

As the island declared three days of mourning, Portuguese President Marcelo Rebelo de Sousa arrived in a display of solidarity, telling reporters that “all Portuguese people” shared their shock.

He was due to visit the scene of the disaster as well as a hospital and a civil defense facility.

Madeira, a popular destination for European tourists, is the largest of a group of Portuguese islands in the north Atlantic Ocean, south-west of the Portuguese mainland.

People had gathered outside a church in a village in the hills overlooking the town to celebrate the Roman Catholic Feast of the Assumption, which takes place on Tuesday and is a public holiday. The Lady of the Mount festival is the island’s biggest.

The tree came down just after midday (11:00 GMT) on Fountain Square, which has a Catholic shrine and other monuments, and is shaded by plane trees, according to the Funchal town website.

“I heard a great noise and when I looked at the tree it was already falling but was too fast and people started to run and those who couldn’t run stayed under the tree,” one unnamed eyewitness said.

“It was something we will never forget,” said another. “It sounded like shots and it just gave us time to look and run away when we realised there were people under the tree.”

Emergency services flooded the area after the disaster, tending to the injured.

Witnesses quoted by Portuguese broadcaster RTP say the tree that fell had been shored up for at least two years because the trunk was hollow.

President de Sousa said it was not for him to give an opinion on responsibility for the disaster as that was a “matter for the regional authorities”.

“The president of the republic is conveying the clear, total and unconditional solidarity of the Portuguese,” he said.

This year’s festival would have been all the more special because, Portuguese news site Publico notes, last year’s event had to be cancelled due to forest fires.

Related Topics:EuropeFunchalPortuguese island of Madeira
Up Next

Girl killed as car rams pizzeria in village near Paris