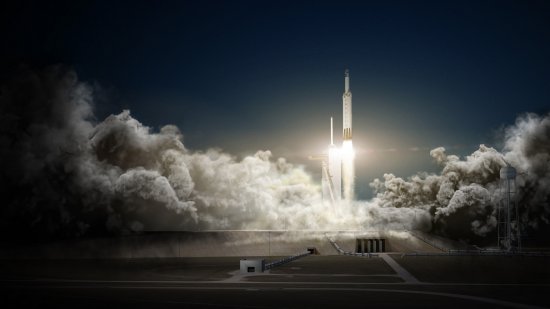 The rocket-capsul combo blasted-off from Launch Complex 39A at 12:31 p.m. EDT. The blastoff was broadcast live on NASA TV.

Just a few minutes after the launch, the Dragon craft separated from the Falcon 9 rocket and deployed its solar panels.

“Crew members aboard the International Space Station can expect a special delivery Wednesday morning,” NASA confirmed in an update. “A SpaceX Dragon spacecraft loaded with more than 6,400 pounds of supplies, equipment and science materials is heading their way after the successful liftoff of SpaceX CRS-12.”

The cargo includes a supercomputer built by Hewlett Packard Enterprises. The so-called Spaceborne Computer will be the first high performance commercial off-the-shelf computer system to operate in space.

“The goal is for the system to operate seamlessly in the harsh conditions of space for one year — roughly the amount of time it will take to travel to Mars,” HPE wrote in an update.

Dragon’s cargo also includes equipment for the Cosmic Ray Energetics and Mass project, an experiment designed to study cosmic rays. The refrigerator-sized detector, dubbed ISS-CREAM, will be attached to the outside of the space station.

According to NASA, it will “measure the highest-energy particles of any detector yet flown in space.”

Cosmic rays are high-energy particles from beyond our solar system and are the remnant of exploded stellar material from supernovas and other violent cosmic events. ISS-CREAM will be the third cosmic ray detection device on the space station.

After the Dragon capsule separated from the rocket, Falcon 9’s first stage fell back to Earth and successfully landed at SpaceX’s Cape Canaveral landing pad, Landing Zone 1. So far, all of SpaceX’s rocket ground landing attempts have been successful.

The space agency’s television station will stream the linkup between the cargoship and space station on August 16. Coverage will begin Wednesday morning at 5:30 a.m. EDT.