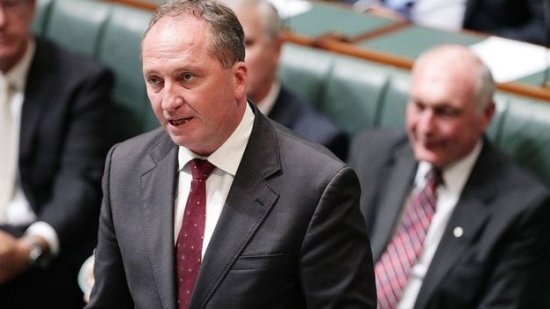 Dual citizens are not allowed to run for public office under Australia’s constitution.

Mr Joyce revealed earlier that he may have New Zealand citizenship by descent, but said he will take his case to the nation’s High Court.

The office of New Zealand Internal Affairs Minister Peter Dunne confirmed to Australian media that under New Zealand law, a child born to a New Zealand national is automatically given citizenship.

However, Mr Joyce told parliament he received legal advice that he is not in breach of rules. He will remain as deputy PM in the meantime.

Mr Joyce is the latest of several Australian politicians to be caught up in dual citizenship scandals.

Two senators, Scott Ludlam and Larissa Waters, were forced to resign last month over their citizenship status. Another two senators, Matt Canavan and Malcolm Roberts, will also have their eligibility decided by the High Court.

Who is Mr Joyce?

He is the leader of the National Party, the junior partner in Mr Turnbull’s conservative coalition.

Mr Joyce entered the Senate in 2005, where he served for eight years, before moving to the lower House of Representatives in 2013.

Known for his straight-talking comments, Mr Joyce gained international attention by clamping down on Johnny Depp’s dogs and rebuking critics of Australia Day.

What is his citizenship defence?

Speaking in parliament, Mr Joyce said he was contacted by the New Zealand High Commission last week and informed he could be a citizen by descent.

“Needless to say, I was shocked about this,” he said on Monday.

“Neither I, nor my parents have ever had any reason to believe I may be a citizen of another country.”

Mr Joyce’s father was born in New Zealand and moved to Australia in 1947. The politician was born in the New South Wales town of Tamworth in 1967.

Mr Joyce said he had been advised by Australia’s solicitor-general that he was not in breach of the constitution.

What does the constitution say on this issue?

The Section 44 (Disqualification) states that any person who “is under any acknowledgment of allegiance, obedience, or adherence to a foreign power, or is a subject or a citizen or entitled to the rights or privileges of a subject or a citizen of a foreign power… shall be incapable of being chosen or of sitting as a senator or a member of the House of Representatives”.

This is interpreted as meaning that people with dual citizenship are not permitted to run for office.

However, experts have said there is uncertainty surrounding the rules, particularly on the issue of citizenship by descent.

What happens if Mr Joyce is ruled ineligible?

Currently, Mr Turnbull’s government has only a slim one-seat majority in the House of Representatives.

If Mr Joyce were to be ruled ineligible, it would force a by-election, and the government’s hold on power would be at risk.

However, Mr Turnbull could retain government with the support of independent MPs and minor parties.

Treasurer Scott Morrison, a senior government minister, said it was important not to “leap to conclusions”.

What was Mr Turnbull’s reaction?

He said it was time for the High Court to clarify the precise meaning of Section 44.

“With around half of all Australians having a foreign-born parent and with many foreign nations having citizenship laws which confer citizenship by descent, regardless of place of birth, the potential for many, possibly millions of Australians unknowingly having dual citizenship is considerable,” he wrote in the letter.

“The Australian people must have confidence in our political system and resolving any uncertainty is vital.”

Australian woman to stand trial in Colombia over drugs