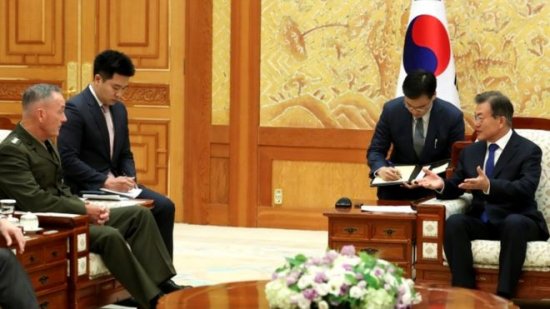 South Korean President Moon Jae-in has called on his US allies to help prevent a war, amid worsening tension over the North’s nuclear threat.

Mr Moon told the visiting top US military official that there must be a diplomatic solution to the crisis.

Gen Joseph Dunford said the US priority was diplomacy but added that military options were being prepared should sanctions against the North fail.

The North on Monday said any war could “only be turned into a nuclear war”.

Also on Monday, China’s commerce ministry issued an order banning a slew of imports from North Korea, in line with additional UN sanctions that were announced earlier this month.

The sanctions were introduced in response to a wave of missile tests and increased military rhetoric from North Korea.

The latest tests led US President Donald Trump to warn of “fire and fury like the world has never seen”.

He said the US was “locked and loaded” after the North threatened to target the US territory of Guam with missile tests. The US has 28,500 troops in South Korea.

“I am confident that the US will respond to the current situation in a calm and responsible manner in line with our policy direction.”

He said the 1950-53 Korean war had “cost more than a million lives, left cities in ruins and perpetuated the division of the peninsula”.

Mr Moon also urged the North to “stop all provocations and hostile rhetoric immediately, instead of worsening the situation any further”.

Gen Dunford, the chairman of the US Joint Chiefs of Staff, told Mr Moon that the US priority was supporting diplomatic and economic sanctions against the North, South Korea’s presidential office said.

But military options are being prepared.

Gen Dunford said as he arrived in Seoul: “As a military leader, I have to make sure that the president does have viable military options in the event that the diplomatic and economic pressurisation campaign fails.”

He will later travel to China and Japan.

The North’s news agency, KCNA, warned on Monday that a conflict could be sparked with “a minor incident”.

It said: “The problem is that if the war occurs, it can only be turned into a nuclear war.”

It added: “We are watching every single thing in the United States.”

On Sunday, US National Security Adviser HR McMaster said he did not think the sides were closer to war than a week ago, while CIA Director Mike Pompeo said he saw no intelligence to suggest the sides were on the cusp of a nuclear war.