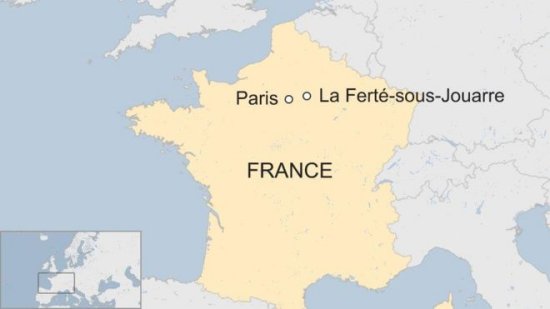 A car has crashed into a pizzeria in a village east of the French capital Paris, killing a girl of eight and injuring at least five other people.

The driver of the BMW was arrested after the vehicle hit the terrace of the cafe in Sept-Sorts, near La Ferté-sous-Jouarre, French media say.

According to RTL radio, the driver, 39, told police he had wanted to kill himself and had weapons in the car.

Reports say the incident is not being treated as a terror attack.

According to the prosecutor’s office in Meaux, the car was driven into the pizzeria as a “deliberate act” but the driver did not appear to be motivated by terrorism, le Parisien newspaper reports.

He appears to have had no previous criminal record, RTL says.

France and a number of other countries have seen deadly vehicle attacks on civilians, notably in the French city of Nice on Bastille Day 2016 when 84 people were killed.

Last week, a man rammed a group of soldiers in Paris, injuring six of them, before being shot and injured by police as he tried to escape on a motorway.