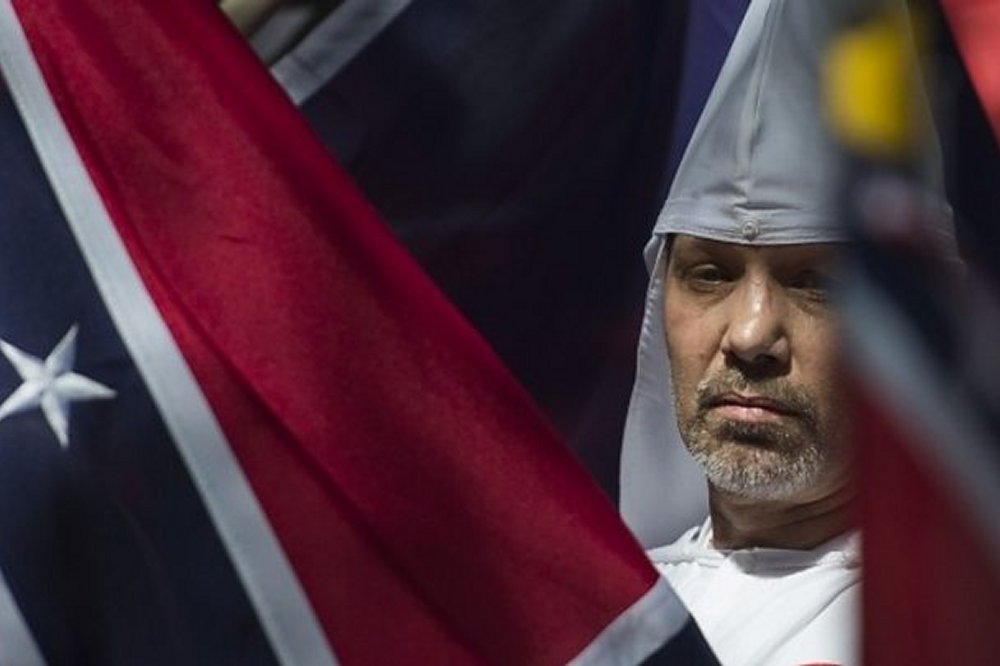 The White House has defended President Donald Trump’s reaction to deadly violence over a white supremacist rally in Virginia, amid criticism he did not explicitly condemn far-right groups.

But a spokesman said his condemnation included white supremacists.

A woman was killed on Saturday when a car rammed into a crowd protesting against the rally in Charlottesville.

Separately, a rally organiser was chased away by protesters as he tried to give a press conference on Sunday.

Jason Kessler, who organised the “Unite the Right” march, was heckled and booed as he blamed the police for not preventing the violence, which he also condemned.

Nineteen people were injured in the car-ramming incident, and another 15 people were wounded in separate clashes related to the far-right march on Saturday afternoon.

Protests and vigils in support of Charlottesville were held in many US cities on Sunday. In Seattle, police used pepper spray to stop protesters approaching a pro-Trump rally.

Hours after the violence erupted, Mr Trump said he condemned “in the strongest possible terms this egregious display of hatred, bigotry, and violence on many sides”.

“The hate and the division must stop right now,” he told reporters in New Jersey, where he is on a working holiday. “We have to come together as Americans with love for our nation.”

But his comments did not explicitly condemn the white extremist groups involved in the rally, an omission that was strongly criticised by Republicans and Democrats alike.

Many, including senators Marco Rubio and Ted Cruz, echoed the sentiment of Colorado Senator Cory Gardner, who tweeted: “Mr President – we must call evil by its name. These were white supremacists and this was domestic terrorism.”

The president’s national security adviser, HR McMaster, went further by commenting: “Anytime that you commit an attack against people to incite fear, it meets the definition of terrorism.”

Mr Trump’s daughter too also appeared to offer stronger condemnation than her father.

The mayor of Charlottesville, Democrat Mike Signer, drew a link between the events and the rhetoric of Mr Trump’s 2016 presidential campaign, saying that “these anti-Semites, racists, Aryans, neo-Nazis, KKK” had come out of the shadows after having “been given a key and a reason to come into the light”.

In response to the criticism, the White House issued a statement on Sunday clarifying that Mr Trump’s condemnation had included white supremacists.

“The president said very strongly in his statement yesterday that he condemns all forms of violence, bigotry and hatred. Of course that includes white supremacists, KKK, neo-Nazi and all extremist groups,” a spokesperson said.

How did the violence unfold?

Hundreds of white nationalists converged for Saturday’s “Unite the Right” march, called to protest against the removal of a statue of a general who had fought for the pro-slavery Confederacy during the US Civil War.

A 32-year-old woman, Heather D Heyer, was later killed when a car was driven into a crowd of dispersing counter-protesters.

Ms Heyer’s mother paid tribute to her daughter, who was a civil rights activist and lawyer.

“She always had a very strong sense of right and wrong, she always, even as a child, was very caught up in what she believed to be fair,” she told the Huffington Post.

“I’m proud that what she was doing was peaceful, she wasn’t there fighting with people.”

Twenty-year-old James Fields from Ohio, the alleged driver, is in detention on suspicion of second-degree murder and the FBI has opened a civil rights investigation.

Some observers say that Mr Trump’s election to the White House has re-energised the far right across the US.

The Southern Poverty Law Center, a civil rights organisation, says that “Trump’s run for office electrified the radical right, which saw in him a champion of the idea that America is fundamentally a white man’s country.”

Trump warns N Korea that US military is ‘locked and loaded’