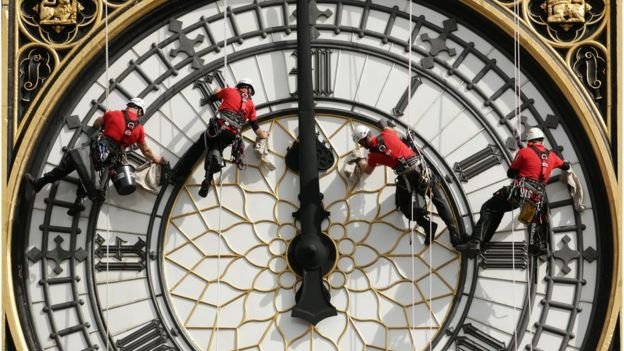 Big Ben’s famous chimes will fall silent from next week until 2021 to allow essential repair works to take place.

The bongs will sound for the final time at midday on Monday before being disconnected to allow the clock and surrounding tower to be restored.

The Great Bell has sounded on the hour for 157 years.

It will still sound for important events including New Year’s Eve and Remembrance Sunday.

The clock’s keeper, Steve Jaggs, said Big Ben falling silent was a “significant milestone” in the project to restore the tower.

“This essential programme of works will safeguard the clock on a long term basis, as well as protecting and preserving its home – the Elizabeth Tower,” he added.

The landmark Elizabeth Tower is said to be the most photographed building in the UK.

Scaffolding is up and repair work has already started.

The project’s principal architect Adam Watrobski told the BBC the works would install new amenities in the tower, including a lift, toilet and kitchen.

Essential maintenance will also be carried out and the building will be made more energy efficient.

As well as conservation work to the tower, the Great Clock will be dismantled piece-by-piece and its four dials will be cleaned and repaired.

The Ayrton Light, which shines when Parliament is sitting, will also be renovated.

During the repair work, an electric motor will drive the clock hands until the main mechanism has been restored, so it will continue to tell the time.

However, the faces will need to be temporarily covered while the clock is undergoing maintenance.

The wider Parliamentary estate is also in need of repair, and a multi billion-pound programme involving MPs temporarily relocating has been put forward.

Related Topics:Adam WatrobskiBig BenEuropePalace of Westminster's Elizabeth Tower
Up Next