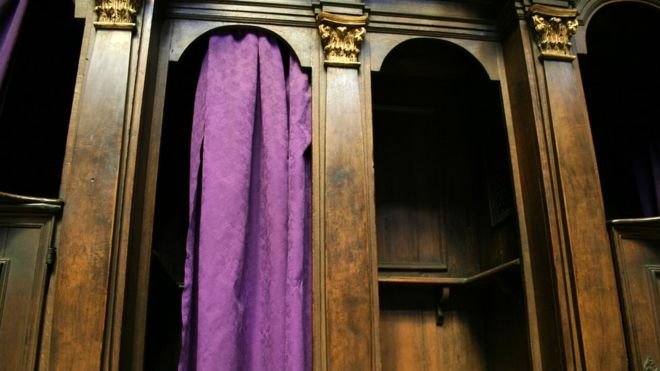 Catholic clerics should face criminal charges if they do not report sexual abuse disclosed to them during confession, an Australian inquiry has recommended.

It is among 85 proposals to emerge from a landmark inquiry into institutional abuse in the nation.

The inquiry had heard harrowing tales of abuse, which were never passed on to the relevant authorities.

The Church has indicated it will oppose altering the rules around confession.

The Royal Commission into Institutional Responses to Child Sexual Abuse, which began in 2013, was contacted by thousands of victims from both religious and non-religious organisations.

On Monday, it proposed wide-ranging changes to Australia’s criminal justice system. The recommendations will now be put to legislators.

The report recommended that people in institutions who “know, suspect or should have suspected” a child was being abused should face criminal charges.

The issue of mandatory reporting was one of the most discussed aspects of the inquiry.

In some cases, abusers had made admissions during Church confession in the knowledge that they would not be relayed to police.

“We heard evidence that perpetrators who confessed to sexually abusing children went on to reoffend and seek forgiveness again,” the report said.

“We have concluded that the importance of protecting children from child sexual abuse means that there should be no exemption from the failure to report offence for clergy in relation to information disclosed in or in connection with a religious confession.”

However, Melbourne Archbishop Denis Hart said the existing rules around confession should remain.

“Confession in the Catholic Church is a spiritual encounter with God through the priest,” he said in a statement to the Catholic Leader.

“It is a fundamental part of the freedom of religion, and it is recognised in the law of Australia and many other countries.

“Outside of this all offences against children must be reported to the authorities, and we are absolutely committed to doing so.”

Other recommendations from the inquiry included:

The commission heard that 7% of the nation’s Catholic priests abused children between 1950 and 2010.

It also heard that 1,100 abuse complaints were made against the Anglican Church of Australia between 1980 and 2015.