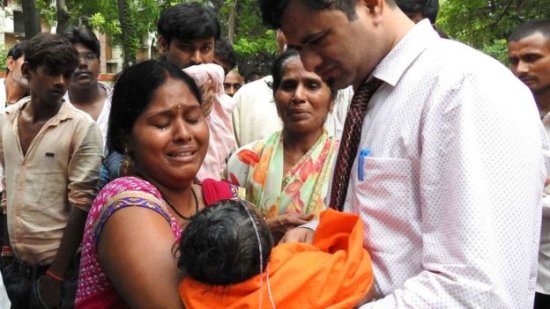 At least 60 children have died at a public hospital in northern India, officials say, amid allegations that the oxygen supply was cut over unpaid bills.

Officials in Uttar Pradesh state admitted the supply had been disrupted but said this did not cause the deaths.

There was panic at the hospital with relatives trying to support staff using manual breathing bags, local media say.

Most victims were at the neonatal unit or being treated for encephalitis.

The deaths occurred over a five-day period from Monday at the Baba Raghav Das hospital in Gorakhpur district. Thirty of the deaths were recorded between Thursday and Friday alone, the hospital said.

District official Anil Kumar recognized there was a “payment issue” with the supplier, but said the deaths could have been caused by “natural” causes as many patients were admitted in a “serious” condition.

The region is one the poorest in India and records hundreds of deaths of children due to diseases, including encephalitis, every year.

“We will be getting more liquid oxygen cylinders tonight or tomorrow, and have also cleared the dues of the supplier,” Mr Kumar said.

State Health Minister Sidharth Nath Singh also rejected that the children had died because of lack of oxygen, saying that the average daily death toll for the month of August at hospital was between 19 and 22 in the last three years. It was not clear if this related only to cases among children.

“There was no shortage of oxygen in the hospital. For two hours, there was shortage of emergency cylinders, during which manual resuscitation procedure was carried out,” he said.

The uncle of an 11-year-old girl who died at hospital told ABP news channel: “We didn’t know what was happening at the time. The staff just told us to keep pressing [the artificial bags] after every count untill three. We kept doing that for some time.”

In a statement, the hospital said “the pressure of the liquid oxygen supply became low” and that reserve cylinders were arranged, but did not specify whether that had resulted in any deaths and why so many children had died in just two days.

The case has sparked outrage in India, with some describing it as a massacre, the BBC’s Sanjoy Majumder in New Delhi reports.

Opposition leaders have been criticised for trying to politicize the issue for blaming Prime Minister Narendra Modi’s Bharatiya Janata Party, which rules the state.

State officials said an investigation has been launched, and Mr Modi’s office said on Twitter that he was constantly monitoring the situation.