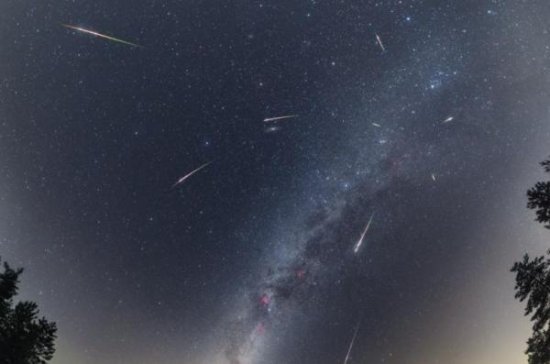 Skywatchers in the Northern Hemisphere will be treated to a show of shooting stars on Friday and Saturday night as the Perseid meteor shower peaks over the weekend.

There is one problem, however: a near-full moon. The moon turned full on August 7. By Saturday, the moon will be an 80 percent full waning gibbous.

Clouds and light-pollution — whether from skyscrapers or full moons — are the primary enemies of stargazing.

Rumors that this month’s Perseids will be of epic proportions have been propagating online. Those spreading the hype apparently failed to check the lunar calendar.

Despite the glare of the moon, viewers will still be able to see some shooting stars, perhaps as many as 20 per hour in the early morning hours. The shooting stars will appear as if they’re coming from the direction of the constellation Perseus.

Meteor showers happen when Earth’s orbit passes through a trail of rocky debris left behind by a comet. The Perseids are created by the collision between Earth’s atmosphere and debris deposited by the Swift-Tuttle comet. As the cometary debris burns up in the atmosphere, fiery trails streak across the sky.

Models have predicted a Perseids outburst the past two years.

“At best, they outburst from a normal rate between 80 and 100 meteors per hour to a few hundred per hour,” Bill Cooke, an astronomer at NASA’s Meteoroid Environments Office in Huntsville, Ala., said in a blog post. “The best Perseid performance of which we are aware occurred back in 1993, when the peak Perseid rate topped 300 meteors per hour. Last year also saw an outburst of just over 200 meteors per hour.”

If clouds ruin your plans to watch the Perseids, the online observatory Slooh will stream the meteor shower live starting Saturday at 8 p.m. EDT.

Alcohol helps goldfish make through the winter without oxygen