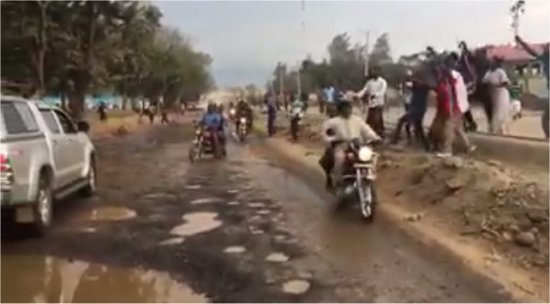 The European Union said candidates should accept losing as “natural”.

Mr Odinga alleges that results of the presidential poll have been rigged to give incumbent Uhuru Kenyatta victory.

Mr Odinga’s supporters celebrated in the western city of Kisumu after his National Super Alliance (Nasa) said he should be declared the winner, although unverified official results give Mr Kenyatta a strong lead.

On Wednesday, Mr Odinga said that the IT system of the Independent Electoral and Boundaries Commission (IEBC) had been hacked, and Kenya was witnessing the worst “voter theft” in its history.

The IEBC said there had been an attempt to hack its system, but it had failed.

Many fear a repeat of the violence after the disputed election 10 years ago when more than 1,100 Kenyans died and 600,000 were displaced.

Scores of people took to the streets of Mathare, a slum in the capital Nairobi, shouting “Uhuru must go”, AFP news agency reported.

Mr Kerry, who is heading the Carter Center’s observer team, urged all sides to wait for the final results, and for the loser to accept defeat.

He said there were “minor variances here and there”, but none that had so far made him doubt the poll’s integrity.

The “bottom-line” was that the IEBC had in place a “transparent process of voting, counting, reporting and securing the vote”, Mr Kerry added at a press conference in Kenya’s capital, Nairobi.

Commonwealth observer mission head and Ghana’s ex-President John Mahama said there was no reason to doubt the IEBC’s ability to deliver a “credible election”.

“We believe that the election has been conducted in a transparent and credible manner and that Kenyans must be commended for that election,” he added.

Expressing a similar view, African Union observer mission head and South Africa’s ex-President Thabo Mbeki said he was satisfied with the way the electoral commission had conducted itself.

The opposition’s hacking allegations should be looked into by the IEBC, he added.