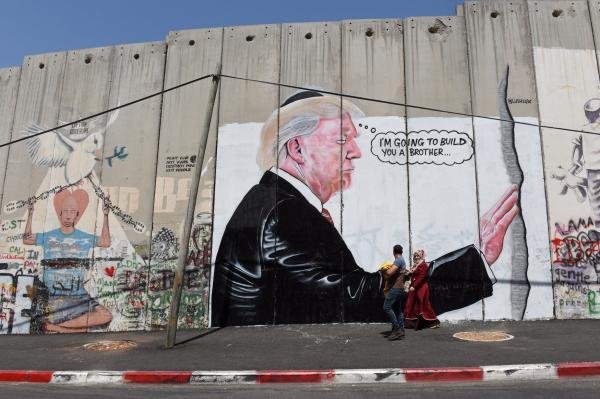 Two murals depicting President Donald Trump have appeared on the wall that separates the Palestinian West Bank town of Bethlehem from Jerusalem.

In one 25-foot-tall drawing, Trump is wearing a Jewish skullcap — called a kippah — and placing a hand on a wall.

A cartoon “thought bubble” next to him says, “I’m going to build you a brother,” a likely reference to Trump’s plans to build a wall along the U.S.-Mexico border.

On May 23, Trump visited Jerusalem’s Western Wall, where Jews can pray but he did not stop at Bethlehem’s wall as part of his trip.

On the other mural, Trump is displayed hugging and kissing an Israeli army watchtower built into the wall, as his left arm reaches around the tower. On Trump’s mouth are little pink hearts.

The works, which appeared Friday, are signed @lushsux.

Lushsux is a street artist based in Melbourne, Australia, who drew a scantily clad mural of Hillary Clinton dressed in a stars-and-stripes bathing suit, which he later covered up with a black burqa.

The are a few feet from the Walled Off Hotel, a Palestinian hotel sponsored by British artist Banksy, who’s created several works in Bethlehem. They appeared soon after transcripts of a Trump phone conversation with Mexican President Enrique Peña Nieto were made public.

In the call, Trump makes reference to his promise to build a border wall.

“You know you look at Israel. Israel has a wall and everyone said do not build a wall, walls do not work — 99.9% of people trying to come across that wall cannot get across,” Trump said.

Israel captured the West Bank, Gaza and east Jerusalem in 1967.