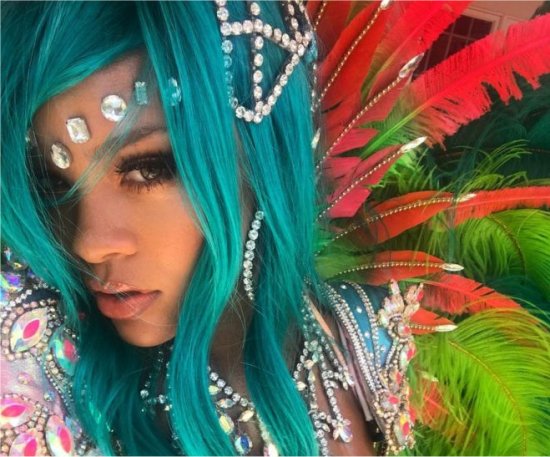 Social media almost collapsed under the reaction to Rihanna’s costume on Monday as the singer attended the Crop Over festival in Barbados.

The 29-year-old had teased fans by uploading photos of her new turquoise hair on Instagram over the weekend.

But the look was completed on Monday as she stepped out in a jewel-encrusted costume with green and pink feathers. (And not much else).

“We are not worthy,” was one of many fan reactions on Twitter.

Another added the singer “officially killed me” with the costume, while others said she was “blessing the internet”.

The posts also attracted the attention of Chris Brown – who left a comment on one of her Instagrams with the pair-of-eyes emoji.

Many of her fans were less than pleased about this, telling him to “keep his negative energy away” from Rihanna and recalling his assault on the singer in 2009 when the pair were dating.

Crop Over started in 1687 to mark the end of the sugar cane crop harvest.

At the time, Barbados was the world’s largest producer of sugar, but as the industry declined, so did the festival – and it was dropped in the 1940s.

But the festival was revived in 1974 and has since become one huge party similar in style to Notting Hill Carnival – with lots of music, dancing and colourful costumes.

The festival, which attracts tourists from around the world, runs from July and ends in early August with the Grand Kadooment Day.

Rihanna has attended the finale parade several times over the last few years – and worn suitably attention-grabbing costumes at each of them.

To be fair, temperatures are around 30C in Barbados at this time of year so she’s just dressing sensibly for the weather, really.

Part of Rihanna’s outfit was designed by DBleudazzled – a line specialising in bedazzled costumes.

The owner of the company, known as Bleu, told Billboard she had to provide the tights at very short notice – with Rihanna’s team only requesting them last Wednesday.

The rest of her outfit was put together by local designer Laura Austin, according to Vogue.

“Crop Over used to be celebrated with people wearing simple T-shirts,” Austin said.

“Over the years however, designers started getting creative. Today it’s very important to dress up in full costume to really and truly feel the Crop Over vibe. It’s exhilarating, free, and radiant.”